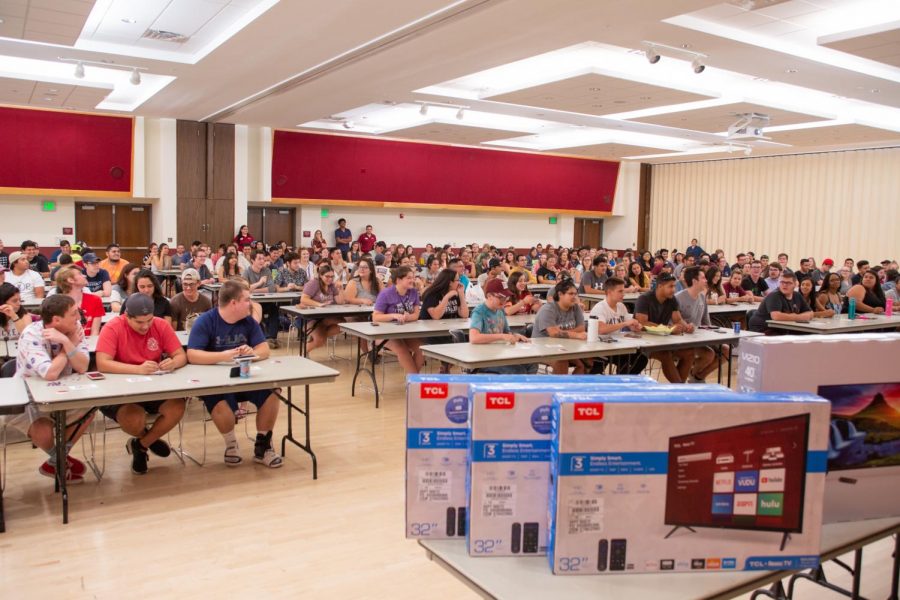 Big Prize Bingo, the bi-annual event hosted by the Residence Hall Association Aug. 26, had to turn students away at the Corbet Center Ballroom due to a large turnout of students hoping to win prizes.

The Corbett Center Ballroom was quickly filled to capacity once the doors were open, greatly surpassing the housing association’s expectations and forcing them to turn away late coming students.

RHA President Brandon Mangum said they were not expecting that large of a turnout.

“For this event, usually we don’t have a cap but we didn’t expect this many kids to come in,” Mangum said. “We had to turn away folks at the door just because it was getting so packed in [the ballroom].”

These prizes were picked by RHA Director of Programming Alexander Warner-Garrett on account of student feedback from past games.

“The prizes for this round of Big Prize Bingo were purchased using a budget surplus from the previous fiscal year,” Warner-Garrett said. The budget is created from a $14 fee paid per semester by students living in residence halls or NMSU on-campus apartments.

Originally meant to take place once a year, the event was also held in the spring semester with better prizes due to its popularity and the excitement of participating students, according to Mangum.

After a 30-minute delay, the event was able to start with the addition of extra chairs and even students standing along the walls, bingo cards in hand.

NMSU junior Joanie Lasiter, who heard of the event from a friend, expressed her determination for the night while waiting for bingo chips.

“I hope I win. Not even for the prizes just [because] I like winning,” Lasiter said.

Breaks were taken between the 21 rounds of bingo, despite students’ anticipation, so the association could advertise the importance of students getting involved and participating in their respective Hall Councils.

Mangum said because of the success of the event, the RHA will be doing the event again in the future.

“As from the turn out today, obviously, [Big Prize Bingo] is something we’ll be doing for a long time to come,” Mangum said.

More information on Hall Council meetings and other events can be found with the RHA in Garcia Hall, west lobby.