NMSU Round Up • September 23, 2019 • https://nmsuroundup.com/14001/features/patrons-of-the-nmsu-arts-a-look-into-devasthali-halls-namesake/

Patrons of the NMSU arts: A look into Devasthali Hall’s namesake 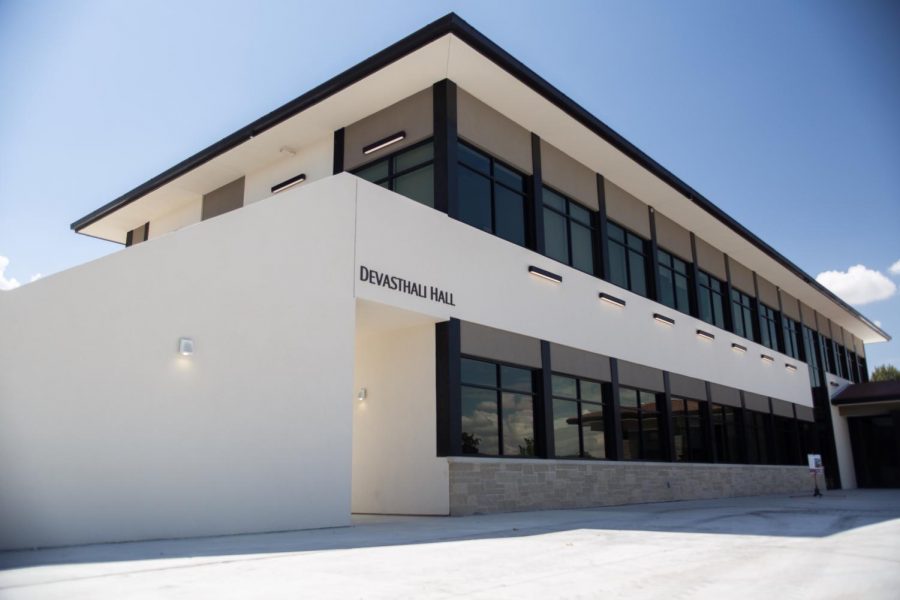 The Devasthali name will remain on the new art building for many years to come, in recognition of the patrons who helped make the vision a reality.

“I’ve lived in this community for 32, 33 years now, so it’s my home. So what better way to leave your impact on this community than being involved at the University?” Ammu Devasthali, New Mexico State University regent and namesake of the new art building said.

Growing up in India where her father was an engineer, Devasthali said her parents exposed her and her siblings to the arts at a young age.

“They exposed us to museums, the theater and all kinds of music but, mostly classical Indian music,” she said.

“Our parents taught us the value of hard work and always helping those in need,” Devasthali said regarding her personal values.

“[Rama] was in Helsinki doing a summer job, and I was on my first solo adventure to Scandinavia,” Devasthali said.

The couple married and moved to Las Cruces in 1981 from Chicago. Rama’s neuroradiology practice brought them to the borderland.

Ammu continued her education at New Mexico State University, receiving two Master’s in Fine Arts–one in printmaking, one in painting.

Over the years, the Devasthalis have cemented themselves as prominent members of the Las Cruces community. The family raised two children here, and Ammu has done her fair share of nonprofit work in the community.

“I was very involved in the community in nonprofit work, and I served on the Board of The Community Foundation of Southern New Mexico for over 14 years,” Devasthali said.

As the vice chair of the board of regents, Devasthali said she thinks “NMSU has the potential to be one of the best universities in the country.”

“The way I look at it, this is our land grant institution. [Everybody] is vested in it…your tax dollars go towards supporting this university,” Devasthali said.

Most recently, Devasthali has used her position in the community to spearhead to construction of the newest building on campus – Devasthali Hall.

During her time as a student at NMSU, she noticed what she called less than satisfying conditions the art department was working with in D. W. Williams Hall.

“I saw how poor the conditions were, and I also saw how hard everybody worked to make those conditions work for the students,” Devasthali said. “At that time I thought that it is truly important that we at least start the conversation about how we can improve facilities for the arts.”

“Basically, we were told [by legislature] ‘Go away, you’re the community, we don’t really need your help.’ It took a long time, because [myself and the others pushing for the building] didn’t have enough clout to get this project on the General Obligation Bond,” Devasthali said.

After their first attempt, Devasthali and her team sent in the request for the new building with the Regents budget every year. When Garrey Carruthers became the university’s chancellor, headway was made, Devasthali said.

According to Devasthali, Carruthers continually asked her, “What are we [the university] going to do with an art building?” After many meetings, Carruthers ended up signing for the construction of the building, Devasthali said.

After approval, Devasthali and her team raised $800,000 in donations towards the building.

With an $800,000 start and private donations being piled on top of that–including a large gift given by the Devasthalis –the art department’s vision became a reality.

“I have to say that the art faculty [played] such a big part in this,” Devasthali said.

The NMSU art department does not feel lightly about the Devasthali family’s contributions either.

“Art is not easily quantified like other disciplines in the university system. Therefore, art has never existed without visionaries like Ammu Devasthali who realize that art is one of the only cultural currencies that never depreciates, elevates human experience, and creates community,” Visiting Assistant Professor Joshua Clark said.

Though proud of the namesake, Devasthali  remains humble.

“If you want to do good in the community, just do it because that’s the right thing to do,” Devasthali said.