NMSU Round Up • October 3, 2019 • https://nmsuroundup.com/14135/campus-life/for-her-brother-an-nmsu-students-resilience-after-the-el-paso-shooting/

For Her Brother: An NMSU student’s resilience after the El Paso Shooting 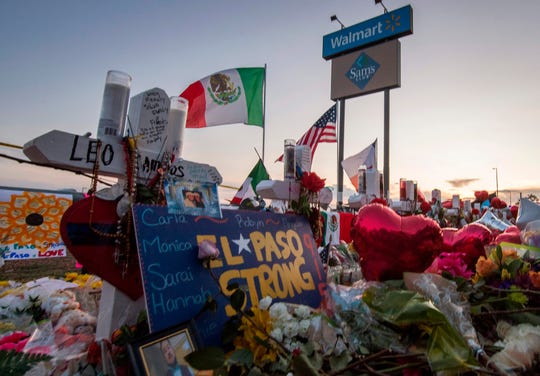 On August 3, Las Cruces’s neighboring city, El Paso, Texas faced one of the deadliest mass shooting in U.S. history. The shooting occurred at a Walmart supercenter near the Cielo Vista Mall, which left 22 killed and 24 injured.

Joanna Rodriguez, a sophomore majoring in psychology at New Mexico State University lost her younger brother, Javier Rodriguez in the tragedy. He was the youngest among the 22 victims at 15 years old.

Communities offer support in the wake of tragedy

In the wake of this horrific event, the El Paso, Las Cruces and NMSU communities have rallied behind Joanna in support of her and her family.

Matteo’s Mexican Food on University Avenue donated 10 percent of their profits from their food sales on Aug. 9 and 10. Joanna worked at the restaurant her freshman year.

The Las Cruces Sun-News reported the restaurant donated additional profits from selling 43 El Paso Strong t-shirts adding up to about $1,000.
The owners of Matteos Mexican Food continue to keep in contact with her and her family to this day, Joanna noted.

“They’ve been really supportive, really helpful towards our family. They constantly call to check in and make sure that we’re doing okay,” Joanna said.

On campus, Joanna explained that the Health Center at NMSU has aided her in this process and that her professors have been very considerate of her circumstances.

“[The health center] has been really helpful. [They] recommended that I email all of my professors and tell them the situation just in case I have to go back home,” Joanna said. “In those times I email them and they’ve been really understanding.”

Joanna believes the Sun City community has become stronger in the face of this tragedy, and won’t allow this hate crime to define their city.

“We’ve had so many people message my mom and I just letting us know that they are here for us and they’ve done so much for us,” Joanna said.

The El Paso community continues to raise funds for her family, which Joanna explained was helpful when her mom had to take off of work for a couple of weeks.

“My mom couldn’t go to work and it’s just her now. She has to pay bills and for college, so it’s all been really helpful to us,” Joanna said.

Khalid, a singer-songwriter from El Paso raised $500,000 for the El Paso Community Fund from his benefit concert – A night for Suncity on Sept. 1. This is just one of many examples of the fundraising efforts in the city.

Joanna expressed her longing to take a gap semester heal with her family. Nevertheless, Joanna is continuing her education and works at Panda Express.

“I didn’t want to come back this semester, I wanted to take a semester off and be with my family and just help them and heal. It was really hard and it’s still really hard,” Joanna said.

Joanna said her resilience is a tribute to Javier. She spoke of their fond memories together with a somber smile on her face.

Javier, Joanna said, was a bright, young student who had a love for soccer and video games just as any other teenage boy. Joanna beamed that Javier is funny and quite the jokester, poking fun at her Spanish mispronunciations. He would always text her and send iMessage games to play with her when she left for college her freshman year.

“I’ve kept in contact with his best friends. He had a lot of friends but he had like a group that he was really close with, and he shows me videos from when they would hang out so it looks like he was living a good life outside of home,” Joanna said.

Javier was adored and loved by his family, especially his younger cousins who loved to play with him. Though Joanna is about an hour away from home, she knows her family is just a phone call or text away. She continues to receive support and encouragement from her parents, tios, tias and cousins.

“I have a lot of little cousins and they are constantly checking up on me. My tios and tias are constantly texting me and calling me. Same thing with my mom and my dad and every time I go back, they’ll come over and visit me,” Joanna said. “Just having their support and knowing that they are there for me as I am for them has helped a lot.”

Joanna said Javier wouldn’t want her family to sulk in the face of adversity. She remembers this daily and tries to grow and make Javier proud, knowing that one day they’ll be reunited.

“He wouldn’t want us to mope around and do nothing. I like to think of it as bettering myself and pushing myself to do better and I know that he would want that. I try to push myself in my classes but sometimes it’s just hard. It’s really hard,” Joanna said.

Joanna said her faith is what instills hope of meeting Javier once again.