NMSU Round Up • November 1, 2019 • https://nmsuroundup.com/14492/news/former-nmsu-journalism-department-head-inducted-into-nmpa-hall-of-fame/ 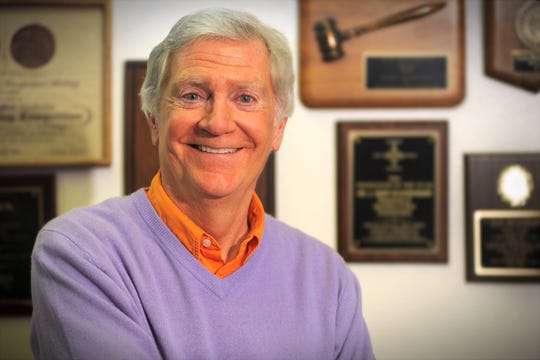 J. Sean McCleneghan was inducted into the NMPA hall of fame Oct. 26. He is the first college educator to be inducted.

In email, McCleneghan said he was surprised by the news and never thought it would happen to him.

“I was shocked. I never dreamed something like this could happen to me. The New Mexico Press Association is a wonderful organization and has done so much for high school and college journalism over its long history,” McCleneghan said.

With 80 scholarly research articles published in academic journals and more than 100 research conference papers presented, McCleneghan has also won awards from the journalism and education community, including five national Kansas State University Huck Boyd community media research awards from 1982 to 2004. In 2002, he earned the Distinguished Silver Anniversary Pioneer Award from the Southwest Education Council for Journalism and Mass Communications.

McCleneghan was awarded the William S. Dixon First Amendment Award from the New Mexico Foundation for Open Government in 2004. In 1988 and 2012, he earned two Donald C. Roush Teaching Excellence Awards from NMSU. McCleneghan earned the first Provost’s Award for Excellence in Academic Advising in 2019 from NMSU student nominations.

In 2013, McCleneghan was named a NMSU Distinguished Achievement Professor and received the Emeritus Professor rank in 2014.

From 1982 to 1994, McCleneghan served as the journalism department head and The Center for Broadcasting for NMSU, retired in 2014 and moved to Augusta, Ga. He described the first 12 years as department head as tough yet successful regarding News 22.

“There were tough personnel decisions to make involving students in their current broadcasting classes into on-the-air news anchors and reporting positions for the “News 22” nightly 30-minute newscast. It was done and it succeeded,” McCleneghan said.

McCleneghan remembered his time in seeing the journalism contests at the Rocky Mountain Collegiate Press Association.

“The battle between NMSU versus Brigham Young University in student broadcast journalism contests at RMCPA was something to behold. In 1989, our department of journalism and mass communication captured the President’s Award for the best J-program in RMCPA,” McCleneghan said.

NMSU Professor Frank Thayer, who worked with McCleneghan when he was department head, described how well McCleneghan did his job in being able to maintain contact with New Mexico media publishers. This was done to assist students and graduates in getting internships or job opportunities.

“I really think he was so much better at it than I ever was as department head because he maintained contact with all the media people in New Mexico. His goal was always to get internships for students and jobs for graduates. That was his style, he was fully intensive from 1982 to 2014 and he retired deciding, ‘That’s it, I’m done,’” Thayer said.

According to McCleneghan, he had media connections in both New Mexico and Texas. He said that every student recommended for their first paid summer writing internship had to get interviewed, show clips and must have completed courses Journalism 110 and 210. McCleneghan would ask NM community journalism editors that were interviewing these students, to go out on an assignment and write a story.

“It was a ‘writing tryout.’ The student doing that live story at his/her newspaper interview had a better competitive chance and not back off. Believe me, they all succeeded,” McCleneghan said.

For the rest of his career before retirement, McCleneghan felt he had a better time being out of the administrative work.

“From 1994-2014, it was a better experience because I no longer had administrative duties. I could concentrate more on my classes, my research and my service obligations for NMSU,” McCleneghan said.

“I’m trying to stay healthy. I walk two miles, stretch, light weightlifting and shooting hoops for 20-minutes five out of seven days a week pretending I’m Pistol Pete, Maravich or Larry Bird. I’ve always lived by this motto: ‘Do the best you can,’” McCleneghan said.