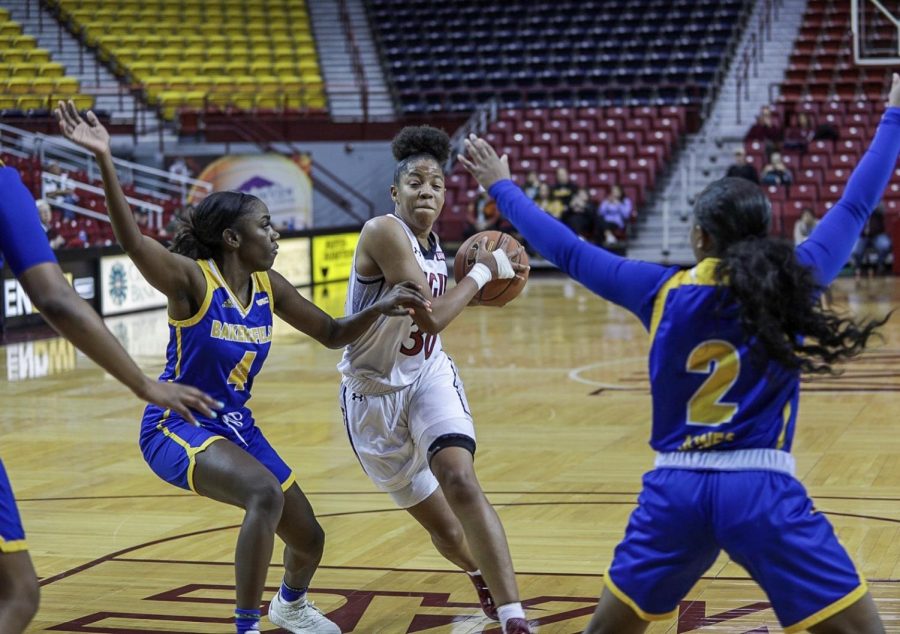 The New Mexico State women’s basketball team bagged their second win of the season Wednesday night against Western New Mexico, downing the Mustangs 75-56 thanks to a strong second half led by Gia Pack.

A monstrous night by Pack, who tallied 26 points, seven defensive rebounds, two assists, and three steals, propelled the Aggies, who had one of NM State’s (2-7) best offensive nights of the season, shooting 49% from the field and 46% from beyond the arc, to their first win in seven contests.

Head coach Brooke Atkinson believes that Pack and the offense are starting to show what they’re capable of after a disappointing start to the season.

“Gia took over, especially in the beginning of the second half,” Atkinson said. “The last two games, that’s the Gia Pack that we know she is and we’re used to seeing.”

NM State came out hot right off the tip—going up 17-4 in the first minutes of the game—but a 12-0 Mustang run led the Aggies with a one point lead going into the second quarter.

The WNMU run left the game up for grabs, providing a tight-knit game all the way until the fourth quarter, where NM State was able to pull away and take control through aggressive defensive play and buckets from the bench.

“It’s just that stop-score mentality. We started on D the first possession, get a stop, get a steal, and then we get a layup,” Atkinson said. “Those first two possessions, we got two really good stops. We just have to continue that.”

Atkinson was also pleased with the turnover discrepancy, with the Aggies forcing 25 Mustang turnovers compared to turning the ball over just 13 times them selves.

“Any time you can turn the ball over 13 or 12 times, you’re just going to give yourself an opportunity to win a basketball game,” Atkinson said. “If we can limit those, our goals before the game were to not give up more than 12 point quarters.”

Defensively, NM State put up numbers they haven’t seen all year, with 15 steals on 25 WNMU turnovers. The Aggies saw profit in holding the Mustangs to four for ten on FG shooting in the fourth quarter, giving the offense a chance to shine on their side of the hardwood.

“When we’re locked in defensively, we’re just much better on both ends. We just have to use our strengths and that’s our athleticism and our quickness,” Atkinson concluded.

The Aggies continue non-conference play this Saturday when they return to the Pan American Center floor to take on a 1-4 Weber State.