NMSU Round Up • January 18, 2020 • https://nmsuroundup.com/14837/sports/nm-state-womens-basketball-pulls-off-17-point-comeback-in-blowout-win-over-seattle/ 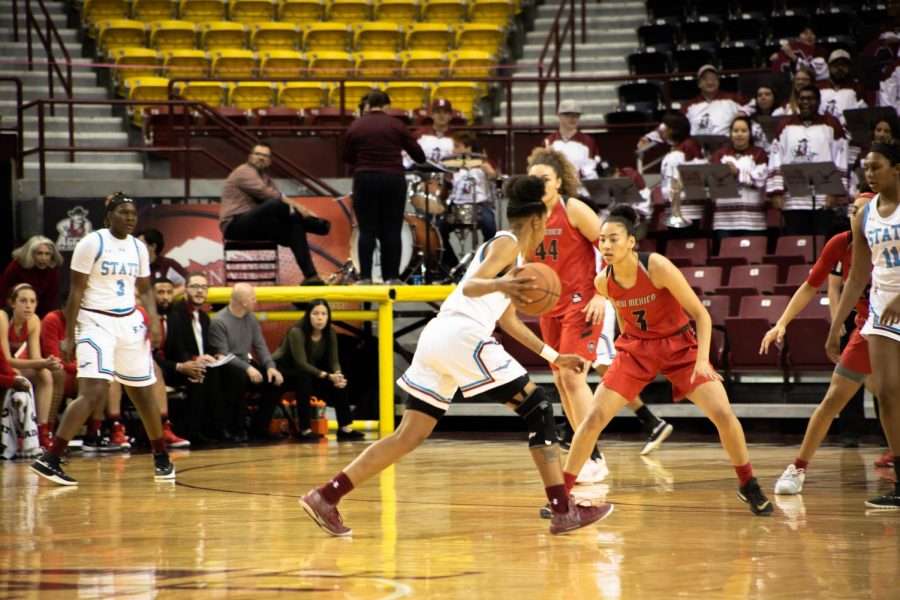 The New Mexico State women’s basketball team make a much needed return to the win column Saturday afternoon, completing a 17-point comeback and knocking off Seattle 83-65 to put an end to a tough two game snide and stay in the WAC contender hunt.

The Aggies blew back-to-back fourth quarter leads in their last two outings, both of which resulted in four-point losses, but facing that adversity looked to payoff in a game where NM State could’ve folded early.

“On the board, before the game, I had the definition of ‘tenacity,’ talking about ordinary talent and extraordinary perseverance — when you have that you can obtain anything… I was really proud at how they stayed to it,” head coach Brooke Atkinson said when asked about the team’s will to win despite the big hole early. “We’ve lost a lot of games close so sometimes the confidence wavers, but when things start to go in the right direction, [the team] just starts to feed off of each other.”

Seattle took advantage of the Aggies’ early game turnover struggles and cold spell from the field to jump out to a 29-12 lead early in the second quarter, but Gia Pack would have something to say about that.

The WAC’s leading scorer and third-leading rebounder would ignite a run that the game to five at halftime, picking up her eighth double-double of the season after just two quarters of play before exploding in the third quarter to give NM State their first lead since the opening minutes at 41-40.

“It was just a stop-score, stop-score [mentality]. We talked about controlling the tempo,” Pack said of the team’s run at the end of the first half leading into the second. “Perseverance… We know that the third and fourth quarter is key.”

The Aggies wouldn’t look back from there, continuing a barrage of scoring to lead by 11 at the end of the third before blowing the Redhawks out of the water in the game’s closing period — a quarter the team have struggled in recently.

Pack showed why she was a clear favorite for the Preseason WAC Player of the Year Award, finishing with a game leading 30 points, 19 rebounds and four assists. Senior forward Adenike Aderinto contributed 12 points and seven rebounds while junior guard Amanda Soderqvist tacked on 14 points off of four three-pointers.

“We all feed off of each other’s energy, so I just wanted to share that with the team. I was feeling good, and they watched it and fed off of it,” Pack said of her putting the offensive load on her shoulders to galvanize the eventual game winning run. “This was a game that we really wanted to win, especially me. This is a big step forward for us.”

With the win, the Aggies avoid falling below .500 in conference play for the first time since 2014 — a record Atkinson and company will look to distance themselves from even more this Thursday when they host UT Rio Grande Valley.