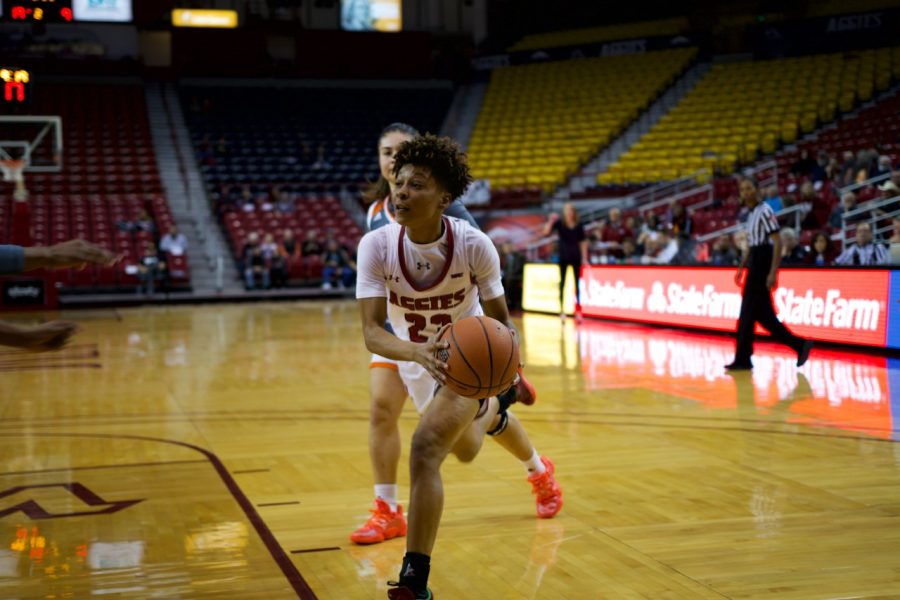 Aaliyah Prince goes off for 20 points and 10 boards in NM State's 67-62 OT win over the Roadrunners.

It took some extra time, but the New Mexico State women’s basketball team managed to come out victorious against Cal State Bakersfield 67-62 on a day where four seniors were honored in the team’s home game of the year.

The Aggie defense impressed from early on, holding CSU Bakersfield to 27% shooting from the floor and forcing six turnovers in the first quarter of play, but neither team was particularly effective in the first half, with both squads failing to top a 35% field goal percentage at the one-point halftime break.

The game started to pick up in the third quarter, with NM State putting getting out and running to the tune of 10 fast break points while holding CSU Bakersfield without a field goal for nearly nine minutes.

“Playing team basketball, especially on the offensive end — I think they knew we would attack” head coach Brooke Atkinson said of her team’s run in the third. “We were spreading the floor really well and attacking the paint and getting paint touches.”

Cal State would storm back in the fourth though, pulling ahead by as much as four in the waning moments of regulation. NM State tied the game down the stretch with a few buckets from Tayelin Grays and had a chance to win at the buzzer, but the Aaliyah Prince jumper would rim out as time expired.

It wouldn’t take long for the Aggies to get back out in front, scoring five quick points to start overtime, but a foul on a three point attempt by CSUB’s Andie Easley would make it a one possession game with under two minutes to play.

CSUB had a number of chances around the basket to tie the game with under a minute, but a Prince steal followed by a pair of Tayelin Grays free throws would seal the deal for NM State, who improve to 11-17 on the year and secure at least a .500 record in the WAC with their eighth conference win.

“Thursday and today really just showed that everybody contributes. If every contributes in some sort of way, we’re going to be successful,” Atkinson said. “It was an ugly game, and that’s kind of what Bakersfield does… We just continued to stick to the game plan and just be aggressive downhill at them. They tried to attack us with size and we attacked them with athleticism.”

Seniors Micayla Buckner, Adenike Aderinto, Dee Dee Echols and Gia Pack were all honored following this afternoon’s game for their contributions to the program, with this class featuring some of the most successful players to be apart of the program’s history.

“Just the tradition that’s been going on here, and their success — it just shows every year, the senior class leadership and what they’ve done how they’ve carried it from one class to the next,” Atkinson said. “Hats off to this class and all the ones who have come before them.”

While Pack — the conference’s leader in points per game and second leading rebounder from a per game basis — has not suited up for the Aggies since Feb. 6, the preseason WAC Player of the Year is gearing up for a return by the start of the conference tournament in March.

Before that, though, NM State will finish off the regular season on the road at Cal Baptist, where the Aggies can stake their final claim for a top-four seed in the WAC Tournament.