NMSU Round Up • March 11, 2020 • https://nmsuroundup.com/15314/sports/aggies-kick-off-tournament-with-resounding-win-in-packs-return-to-action/ 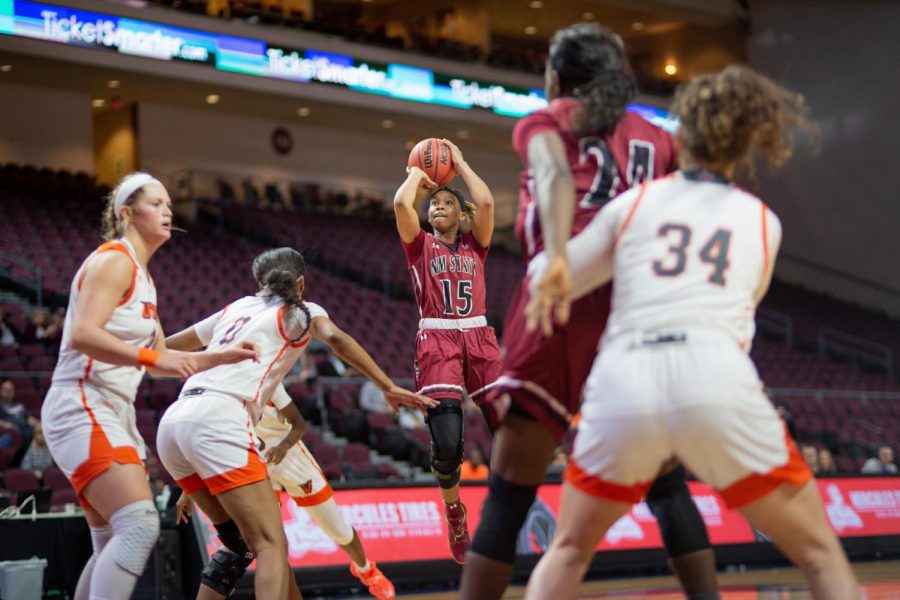 Rodrea Echols pulls up on the UTRGV defense to bury a mid-range jumper in NM State's 73-61 win.

The New Mexico State women’s basketball team managed to pull off the mini-upset in their opening round game of the WAC Tournament against UT Rio Grande Valley, downing the Vipers 73-61 to set up a repeat of the Aggies’ second round matchup from last year against UMKC Friday afternoon.

After giving up the opening bucket of the game, UTRGV nailed back to back threes to claim their only lead of the game before going another 10 minutes without a made shot from the field, which would allow the Aggies to get out to an 11-8 lead at the quarter break.

NM State missed a lot of easy chances around the basket early, but both effectiveness and approach would change as the game progressed, with the Aggies stretching their lead heading into the half while stretching the floor with three-pointers from Rodrea Echols and Soufia Inoussa pushing the advantage up to 12.

The Vipers hung around in the third, cutting the game to within six multiple times, but NM State would not let up as it kept its defensive stranglehold on UTRGV to the tune of 31% shooting allowed for the game, setting up good looks on the other end for one of the more efficient, top-to -bottom offensive outings for the Aggies all season.

“Every single one of us is capable,” Inoussa said. “I just think that the games we played without her showed that we all stepped up, and played as a team today.”

The big story from the Aggies’ first round game was NM State’s superstar point forward Gia Pack making her return to the hardwood after missing the latter half of the conference season with a leg injury, getting her feet wet with game speed while adding 11 rebounds and nine points.

“Obviously having Gia out there, and back healthy is better, just because she brings a presence,” Atkinson said. “She didn’t have any points in the first half, but its someone they have to pay attention to.”

At just 1-for-6 shooting from the field, it was clear Pack was not yet back at the height of her powers, but the sheer presence of the top-10 all-time leading scorer in the program makes the world of difference, and with the rest of the team rising to the occasion as much as they have, NM State has a realistic chance at pushing for another WAC Championship.

“For the rest of the team, that seven game stretch that we played [without her] — I think we were 3-4 — but so much growth happened. We learned, we were sharing the ball, playing good O and good D, and I saw numerous kids take leaps and bounds in confidence.”

The Aggies will take on top-seeded UMKC Friday at noon for a chance to return to the WAC Championship at the Orleans Arena in Las Vegas.