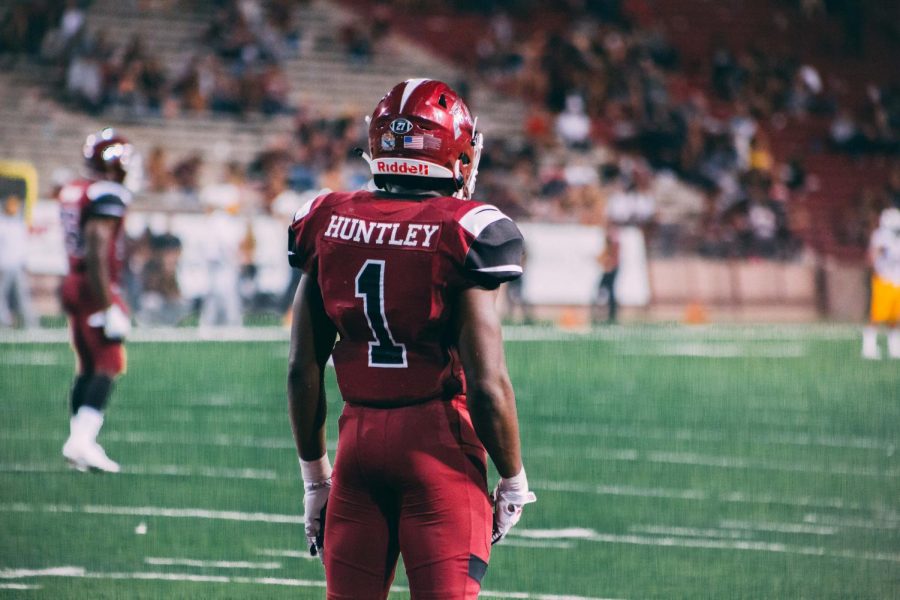 With the 172nd pick in the 2020 NFL Draft, the Detroit Lions select Swiss army-back Jason Huntley.

The elite group of Aggie brethren to get drafted into the National Football League added a member over the weekend, with the Detroit Lions selecting do-it-all running back Jason Huntley with the 172nd pick of the fifth round of this year’s first-ever virtual NFL Draft.

The selection marked the 43rd time an New Mexico State player has been drafted into the NFL since the NFL-ALF merger in 1966 and the first time an Aggie running back was selected since the Baltimore Ravens took Chris Barnes in the fifth round in 2001.

“I was happy, I was speechless. All my hard work just paid off, and I’m just happy to be a Detroit Lion,” Huntley said of his reaction to getting picked during his first press conference as a Lion. “I’m just happy to he able to get with my teammates and just make the best of it.”

Huntley impressed all over the field during his tenure at NM State, racking up 2,182 rushing yards and 18 rushing touchdowns — capped off by a 1000-plus yard senior-season on the ground in 2019 — while proving his value in the passing game with 134 career receptions — good for the ninth most in program history, and that’s as a running back.

“My running style — I’m more of a fast-twitch guy. I think that’s the big think about me, I’m good in space,” Huntley said of his playing style. “I feel like I’m me… I’m fast, you can put me in a lot of different places.”

The Arlington-native made a special impact on special teams, a side of the ball where Huntley could make an immediate impact and challenge for a first-team spot out of the gate, netting five kickoff-return touchdowns over his career and coming just two touchdowns short of tying the all-time NCAA record.

Huntley was not invited to the NFL combine, leaving his draft projection up in the air for the months leading up, but an early pro day held prior to the COVID-19 outbreak and a mass implementation of social distancing orders gave the former Aggie a chance to prove his belonging on a professional roster to NFL scouts (who must’ve been especially enticed by a 4.37 40-yard dash time).

The Lions also added who most considered to be the top running back in the 2020 class in Georgia’s DeAndre Swift early in the second round, giving Detroit a projected day-one starter in an already packed running back room that also features former second round pick out of Auburn Kerryon Johnson and the former Alabama bell-cow Bo Scarborough.

The Detroit backfield was decimated by injuries throughout the 2019 season, however, and struggled mightily in the ground game because of it, with Johnson finishing the season as the team’s leading rusher at just 403 yards over eight games. The addition of Swift and Huntley not only gives the Lions two crafty playmakers to a roster thirsty for talent across the board, but fills a need of both quality and, maybe more importantly, depth.

Huntley could see some time as a change of pace, spell back for whoever takes the lead job in the Lions’ backfield, or etch out a role in passing situations out of the back field or the slot. Whether he finds the field a lot on offense or not, though, I’d bet on Huntley emerging as a return specialist from day one and proving himself as one of the more electrifying athletes in the league.

With NFL training camps likely to start in some sort of virtual capacity over the summer because of the worldwide health situation, the next time we’ll be able to see Huntley on the football field remains a mystery. Whenever that may be, though, and in whatever capacity, it’s safe to say that Aggie nation is looking forward to following one of their greats at the next level, and that Huntley is more than deserving for all the good set to come his way.