NMSU Round Up • September 16, 2020 • https://nmsuroundup.com/16218/showcase/opinion-constitution-day-is-a-sham-because-the-constitution-is-a-failure/ 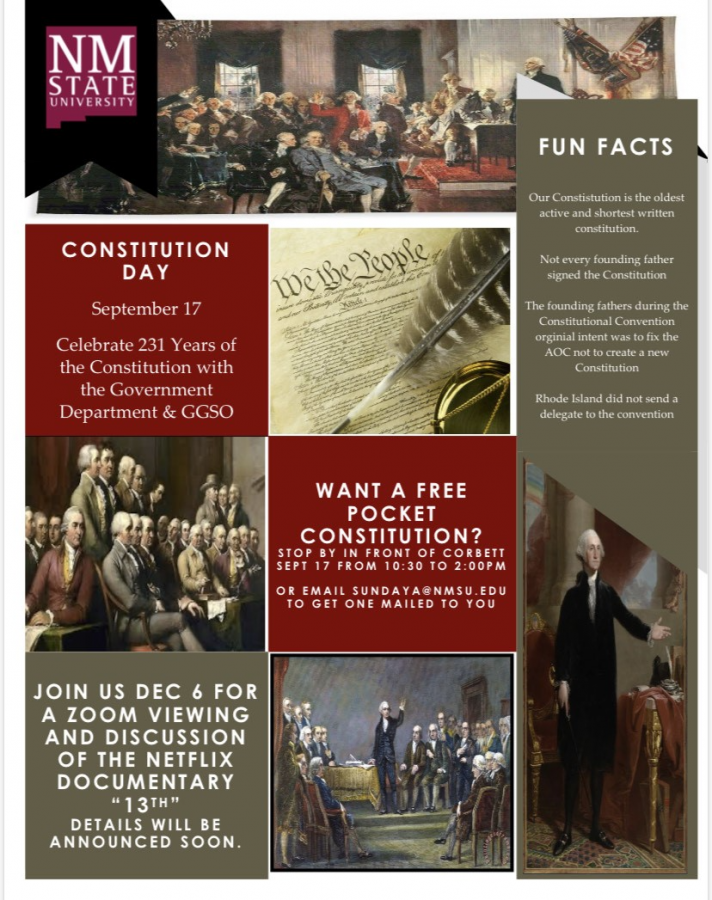 The opinions expressed in this article are solely the author’s.

A year ago I published an opinion piece in the Las Cruces Sun-News asserting that Constitution Day as a celebration should be abolished at New Mexico State University, and that in its place NMSU should hold an event that acknowledges virtues like the First and Fourteenth Amendments while ruthlessly interrogating the founding document’s many shortcomings, including direct and indirect support of slavery and segregation; lacunae that have enabled racist and xenophobic immigration and naturalization policies; an inability to halt the increasingly unstoppable expansion of presidential powers; and modest at best, nonexistent at worst, protection against human rights abuses of vulnerable populations.

But a year later my article, as tough-minded as it was, seems to me naively optimistic in light of the national catastrophes that have unfolded one after another since then. To put it bluntly, the Constitution has proven to be a comprehensive long-term failure: severely defective in its construction and virtually impossible at this point to improve or fundamentally change via the amendment process; perniciously deceptive in its implied promises; ineffectual in practice at many key moments of major stress in American history, including the one we are now in the midst of; and a fiendishly effective tool for the subversion of liberal democracy, to the degree it has managed to exist in the United States, and the persistence and extension of a dark illiberalism cloaked in the camouflage of democracy that has hovered wraithlike over American law, society, politics, and culture since the Constitution’s formal signing on September 17th, 1787 (just ask any African American).

Yet once again New Mexico State University, with the Government Department taking the lead role, prepares to “celebrate” Constitution Day, signed into law by President George W. Bush in 2005 and, tellingly, made a required observance at all higher education institutions receiving federal funding—in the midst of the barrage of criticism the Bush administration was facing over the unfolding disasters of the Iraq War and the mismanaged response to Hurricane Katrina’s devastation of New Orleans.

It is the solemn obligation of NMSU in general and the Government Department in particular to cultivate in Government majors along with all of our university’s students a devotion to rigor and the relentless search for even the most discomfiting of truths—to encourage them to develop the “splinter of ice in the heart” of the investigator, to paraphrase novelist Graham Greene’s famous formulation, and to leave behind the familiar, unexamined shibboleths they have long accepted as fact.

But if our students are not consistently, persistently, exhorted to be skeptical, in the scholarly sense of the word, they will remain unskeptical, which is by definition unscholarly. As long as the Government Department acquiesces in dancing to the tune of the federal government and uncritically invites the university community to “celebrate 231 years of the Constitution,” we will not be properly fulfilling our essential teaching and intellectual modeling role concerning the rigorous evaluation of an issue of the greatest possible national importance.

The Government Department’s flyer offers gossamer-light “fun facts” about the Constitution. But there is a near-bottomless supply of not-at-all fun constitutional facts. For the balance of this essay let us look at just one: The Electoral College is an unmitigated catastrophe that is so dangerous at this point it may by itself destroy the American political system by enabling the ascension to the White House a parade of presidents devoid of a popular mandate, to the ever-mounting, and ultimately uncontainable, fury of the thwarted majority of voters.

Do I have your attention? Good. Let us proceed.

Despite many decades of pious claims that the United States is the Leader of the Free World, political scientist Jonathan Holtzer notes that “[t]he U.S. is the only democracy in the world where a presidential candidate can get the most popular votes and still lose the election.” The villain is of course the Electoral College, set out in Article II, Section 1 of the Constitution. It is an ongoing, democracy-subverting and, worst, all but uncorrectable train wreck, various convoluted Rube Goldberg-esque ideas to the contrary, that makes possible—arguably, increasingly likely—the election of presidents, who have come to hold the strongest hand of the three branches of government whenever they wish to play it, who lack the fundamental legitimacy provided by a popular vote victory.

All of John Adams’s and James Madison’s hand-wringing over majoritarian tyranny has proven over time to be a self-deceiving, self-justifying argument for minoritarian tyranny, which has offered a powerful precedent for curtailing or withholding the franchise from various population segments, large and small alike, whenever it suits those who hold, and wish to maintain or expand, power against the public will.

(Nota bene, “tyranny of the minority” is somewhat different from the “counter-majoritarian” element of the federal court, an admitted constitutional virtue as a protection of out-groups from legislative and executive injustice and persecution, although it is vastly overrated—e.g. the 1954 Brown v. Board of Education Supreme Court decision, which of course merely overturned the grotesque 1896 Plessy v. Ferguson “separate but equal” ruling, proved sufficiently toothless in the face of southern white supremacist resistance that it took the Civil Rights movement, born out of the decision’s ineffectuality, a glacial and bloody decade to finally realize the explicit but unkept promises of the 14th and 15th Amendments.)

By one measure the US presidential election system gives individual Wyoming voters 57 times the power of individual California voters. And even a more modest evaluation concludes that Wyoming’s voters have 3.6 times as much POTUS-electing clout as Californians. Moreover, since some of the thinnest-populated states are also some of the whitest, the Electoral College further reduces the voting power of peoples of color, most dramatically Latinos/as and African Americans.

It should be stressed that there is nothing especially new or radical in denouncing the robbery of representational power from the many to benefit the few as an outrage against electoral and governance justice—as Alexander Hamilton (that “bastard, orphan, son of a whore”) declared in Federalist 22,

“Every idea of proportion and every rule of fair representation conspire to condemn a principle, which gives to Rhode Island an equal weight in the scale of power with Massachusetts, or Connecticut, or New York…Its operation contradicts the fundamental maxim of republican government, which requires that the sense of the majority should prevail.”

Alexander Hamilton’s alarum was raised against the proposed Senate—where, it should be noted, Wyoming voters today have 67 times the clout of their California co-citizens—but though he was not by any means a supporter of unmediated democracy, Hamilton was thinking even more broadly about the “sense of the majority,” to the extent that he raised the idea of abolishing states altogether, which implicitly conflicted with his likely disingenuous support of the Electoral College model in Federalist 68. Nonetheless, a democracy-limiting  or -thwarting system is exactly what the Founders deliberately devised, and which has bedeviled American politics and society since 1787.

Indeed, Donald Trump candidly acknowledged the existential threat posed by a hostile majority to minority rule when he observed, concerning the danger mail-in voting poses to Republican national electoral prospects, that Democrats would have “levels of voting that, if you ever agreed to it, you’d never have a Republican elected in this country again.” The Electoral College, abetted by the constitutionally-granted control of Congressional district-drawing by individual states (even if the courts occasionally intervene in the most egregious cases), is a sulfurous font from which rivulets of anti-democratic chicanery have oozed over time.

While the popular and Electoral College votes coincided for the century encompassing 1888-1988 (albeit with large swaths of African American citizens excluded from the process for most of the period), the spectre of a minority-vote presidency has been an omnipresent threat waiting for its moment—and the moment is now. Both 21st century Republican presidents won office with a minority of the popular vote. George W. Bush managed to eke out a 50.7%-48.3% victory in his 2004 re-election campaign, the only time since 1988 that a Republican presidential candidate has won a majority of the popular vote. We will see if President Trump wins an unprecedented second term while losing the popular vote. If he does it will be a (nonpartisan) political disaster that threatens to destroy what little is left of Americans’ trust in government—but it will not be a surprise.

Constitution Day is a naked propaganda exercise designed to inculcate American students with an uncritical fealty to a founding document that has been responsible for the disfranchisement and suffering of many millions of Americans for over 230 years. If NMSU’s administration insists on the university’s pompom-waving participation because of the desperate venality for which it is sadly becoming infamous, then so be it, as wrongheaded and academically counter-productive as it is.

But the NMSU Department of Government should jealously embrace its unique educational mission and actively—indeed, very publicly—refuse to participate in the federally mandated Constitution Day “celebration.” If the Government Department wishes to engage in the worthy exercise of holding an event meant to pitilessly scrutinize, not reflexively celebrate, the Constitution, we should do so on our schedule and in our own way for our own purposes, not the government’s, in the service of the commonweal. The powers-that-be do not deserve our imprimatur for their pernicious farce, and we should not provide it, now or ever.