NMSU Round Up • November 2, 2020 • https://nmsuroundup.com/16720/campus-life/political-student-organizations-at-nmsu-gear-up-for-2020-general-election/

Political student organizations at NMSU gear up for 2020 General Election 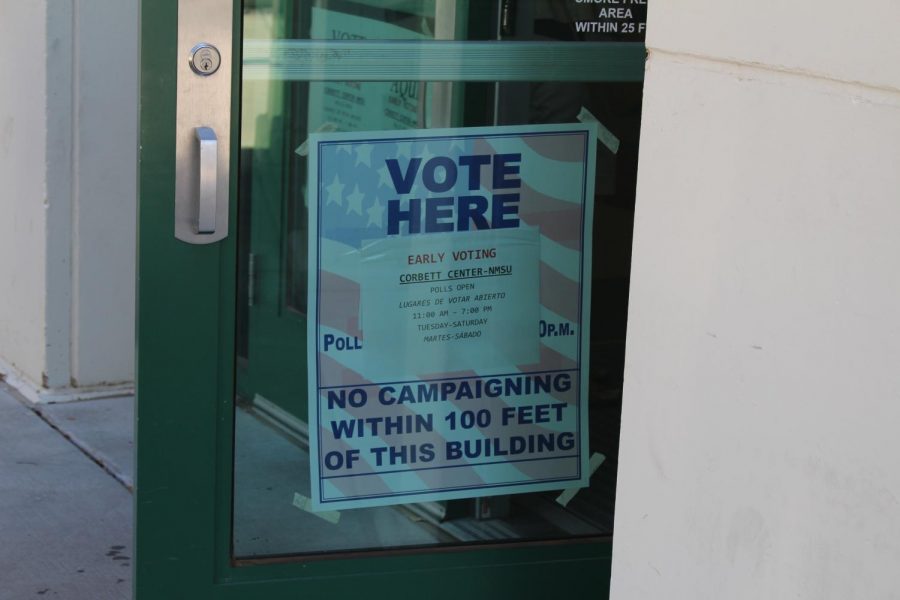 Voters in Doña Ana County may vote at the Aggie Lounge during the 2020 General Election.

Political student organizations at New Mexico State University have been gearing up for tomorrow’s 2020 General Election all semester long with various events and voting initiatives, whereas such organizations at NMSU include the Students for Trump at NMSU, College Republicans and College Democrats.

Torres, a senior, predicts President Trump will be reelected and said the student chapter has not been as active as other semesters due to the effects of COVID-19 and wanting to avoid harassment from those who oppose President Trump.

“We don’t really do anything because we’re also afraid of being harassed on campus. New Mexico’s a very blue state and they are against President Trump for, I guess, believing the media and it’s lies,” Torres said.

NMSU’s College Republicans’ main goal is to establish a Republican presence on campus. This student organization began tabling early in the semester to reach students about different political candidates but as weeks went on, College Republicans President Edward Kilroy said they lessened the frequency of their tabling due to increased coronavirus cases in the area.

In addition to tabling on campus, the College Republicans have also been active in College of Arts and Sciences Student Council meetings and they have been in contact with the Doña Ana Republican Party.

Kilroy, who is also a graduate student in government, commented on this year’s election season by highlighting the effects of COVID-19 and increased mail-in voting.

“I think the debates [are] pretty interesting. Obviously, the virus definitely complicated things and then the whole mailing ballot program that they were putting on is also an interesting aspect,” Kilroy said.

The NMSU College Democrats have been meeting every other Thursday for formal meetings and hosting various events each week which include phone banking and virtual town halls.

Dante Archibeque, president of the organization as well as president of the New Mexico College Democrats, said he was “cautiously optimistic” about any Democratic wins since watching recent political debates.

Archibeque said that as a result, the NMSU College Democrats have volunteered in efforts to get Democrats elected in New Mexico,  where one of which includes reelecting U.S. Congresswoman Xochitl Torres Small who is rematching Republican candidate Yvette Herrell in the close race for New Mexico’s Second Congressional District.

“Some events include phone and text banking for Xochitl Torres Small. We also did phone banking for Naomi Martinez and she’s planning to represent Senate District 35 down here in southern New Mexico,” Archibeque said.

Archibeque, who is also a senior majoring in chemical engineering, said the student organization’s overall mission is to encourage people between the ages 18 to 25 to vote.

Torres said going out to vote is important but that it is important that voters do their homework before they go out to cast their ballot.

“I think it’s very important for people to go out to vote, but they should also be educated on who they’re voting for they should do their research on the candidate,” Torres said.

Kilroy commented on the importance of voting but said it can be difficult to research all candidates on a ballot.

“I think voting is very important but I don’t think everybody has the time to really look into exactly what every local state and federal politician represents—I think a lot of people will instead just choose one party or the other,” Kilroy claimed.

Archibeque stressed the idea of how important a vote is for the people around you.

“It’s your civic duty to vote—your vote still matters to the people that need it the most. Even though it doesn’t affect you, it could be a life-or-death vote for other people,” Archibeque stated.

Students interested in joining any of these organizations can contact their respective student leaders through NMSU Presence under the political category.

Voting for the 2020 General Election began in September and October around the country, and Election Day is tomorrow, Nov. 3.