NMSU Round Up • February 21, 2021 • https://nmsuroundup.com/17304/sports/nm-state-football-demolished-by-tarleton-state-in-strange-season-opener/ 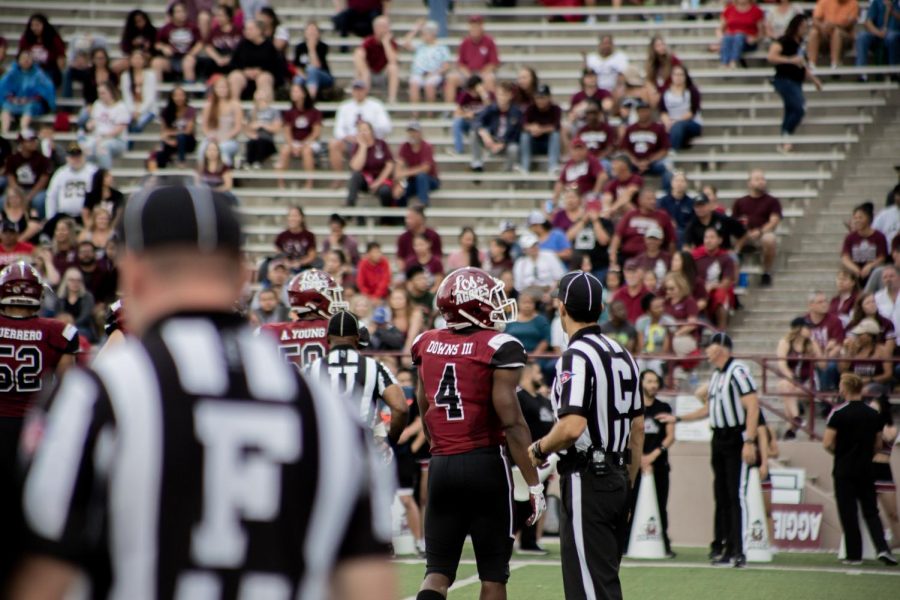 The Aggies struggle mightily in their first football game in 450 days against the FCS newcomer Texans.

After 450 football-less days, the New Mexico State football team was back on the field Sunday afternoon, hosting Tarleton State at the Sun Bowl in El Paso, and while returning to play is an encouraging sign for regardless of outcome, it’s hard to see the positives in the Aggies’s 43-17 embarrassment suffered at the hands of the Texans.

In their first of two games in the season, NM State was out-gained by over 250 yards of total offense by a team playing its first game as an FCS school missing five starters to contact tracing announced just before kickoff — and that only scratches the surface.

TSU was in the driver’s seat from the game’s opening plays, with back-up quarterback Cameron Burston rushing for a 70-yard touchdown on the game’s opening play from scrimmage and hooking up with Gabe Douglas on the Texans’ second play for an 86-yard score, taking a two possession lead after three minutes of play. Burston added another rushing touchdown on a Lamar Jackson-esque 21-yard scramble that made half of the Aggie defense miss later in the first quarter, before finding Douglas for a second time in the end zone from 29-yards out.

The only score for the Aggies in the first half came off a 94-yard kickoff return from Juwuan Price, who did his best Jason Huntley impression on what looked like it could’ve been a momentum shifting play that brought the Aggies within a touchdown early, but a safety on a fumbled pitch in the following offensive possession put that to a hault.

The defense from the Texans was outstanding in the first half, holding the Aggies only 42 total yards, and a shocking negative-three ground yards, on 1.6 yards per play while forcing a second quarter interception.

The start of the second half saw the Aggies get the opening kickoff, but another Jonah Johnson interception on the first play of the half was returned to the red zone by the Texans Benjie Franklin to set up a four-yard rushing score by Deangelo Rosemond to give Tarelton a 40-7 lead. Johnson was picked, albeit off of a blatant drop, for a third time on the next drive, encapsulating NM State’s offensive struggles on the night.

The game started to slow down as the third quarter poured into the fourth, with each team tacking on a field goal, but the Aggie offense found some semblance of life late in the fourth, when Johnson hit Robert Downs III on a corner to score NM State’s lone offensive touchdown of the day and do some window dressing before the game went final at 43-17.

As a team, the Aggies totaled in 241 yards (187 passing and 54 rushing) with a chunk of that coming during what one might call garbage time, while the Texans were outstanding all aspects, amassing 503 yards with near even contribution from the running and passing game.

NM State’s road to playing hasn’t been without its speed bumps, with the Aggies being one of three FBS teams opting to forego playing football in the fall as a result of COVID-19 and still not being able to do anything more than practice in the state of New Mexico (a luxury they were not afforded until the last month). With all that already staring the Aggies in the face, head coach Doug Martin’s program was tasked with replacing nearly all of its 2019 production after losing the majority of its rushing, passing, receiving and tackling leaders from last season to graduation or the transfer portal.

The biggest question throughout the shortened offseason was always who would end up being under center for the Aggies, and while Martin ensured that both signal callers on the depth chart would get some burn, it was the Fresno City College transfer Jonah Johnson who was given the keys to the offense for the first game.

While Johnson would have liked to have a cleaner debut — the junior completed 17 of his 31 tries for 187 yards, a score and the three picks — it’s fair to say Johnson was not the reason for NM State’s problems, as he was under duress for the majority of the afternoon, forced to handle rolling snaps on multiple occasions and unlucky to see several of those passes caught on clear drops. Still, it’s likely we see redshirt freshman Weston Eget get a chance going forward to see what the Aggies have going forward into what should be a much more normal 2021 fall season.

The Aggies will have plenty of room to improve over the next two weeks as they ready for their second and final game of the season against Dixie State.