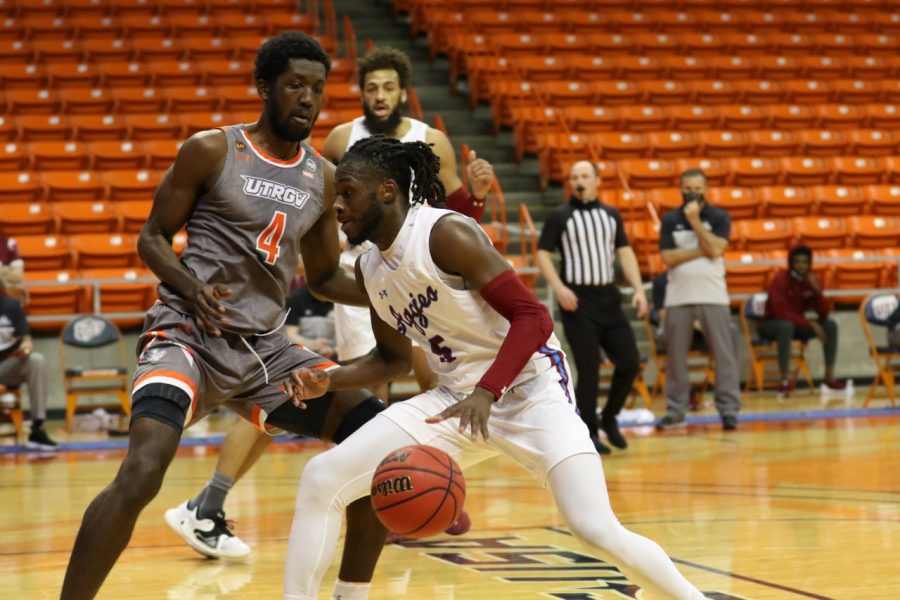 The Aggies get above .500 for the first time since getting swept against GCU with their win over the Vaqueros. (Photo courtesy of New Mexico State Athletics)

The New Mexico State men’s basketball team managed to get back on track with a 69-51 win over UTRGV despite an awkward reschedule to a Tuesday morning and a limited roster.

The Aggies were without Wilfried Likayi, Donnie Tillman, Gerald Doakes as a result of injury and non-COVID related illness, making things all the more challenging for head coach Chris Jans’ squad, who struggled early, hitting just two of their fist 16 shots from the field.

UTRGV found a little bit of light on the offensive side going on a little 6-0 run that gave them an 11-5 lead, but an 11-0 run by the Aggies later in the period flipped the script, giving them a 23-15 lead that the Vaqueros would never catch up on.

To finish out the first half the Aggies got two scores in the last minute — one on a low post move lay in by Johnny McCants and an acrobatic one leg jump, fade away three-point buzzer beater from C.J. Roberts that pushed the lead to double-digits.

NM State carries the lead into half time 31-19, with both teams shooting 32% from the field. C.J. Roberts leads all scorers with 10 points. The Aggies dominated the boards all night, pulling down 11 off the offensive glass in the first half and 19 for the game (44 rebounds total, compared to just 32 by UTRGV).

After the Vaqueros started out the second half with a score from downtown, the Aggies went on an 8-0 run as they looked as they took complete control, pushing the lead up to 39-22.

UTRGV clawed back to make things competitive with an 8-0 run around the ten-minute mark, getting within 10-points, but that would be enough as the remainder of the second half was just back and forth with the Aggies keeping a pretty sizable lead until the end winning it by an 18-point deference 69-51.

Both teams struggled to find their shooting stroke, with the Aggies registering 38% from the field and the Vaqueros coming in at 37%. NM State’s defense, on the other hand, made up for whatever deficiencies they met on the offensive end, converting 24 points on 16 forced turnovers by UTRGV. In the end, it was Jabari Rice who led all scorers with 16 points, as well as leading all rebounders totaling in eight boards.

New Mexico State only has one more series left in the regular season as they will travel Utah to face off against Dixie State this coming Friday and Saturday before taking on WAC Vegas in the weekend after next for their title-defense.