NMSU Round Up • April 15, 2021 • https://nmsuroundup.com/17742/sports/nm-state-soccer-cant-upset-utah-valley-in-programs-first-ever-penalty-kick-shootout/ 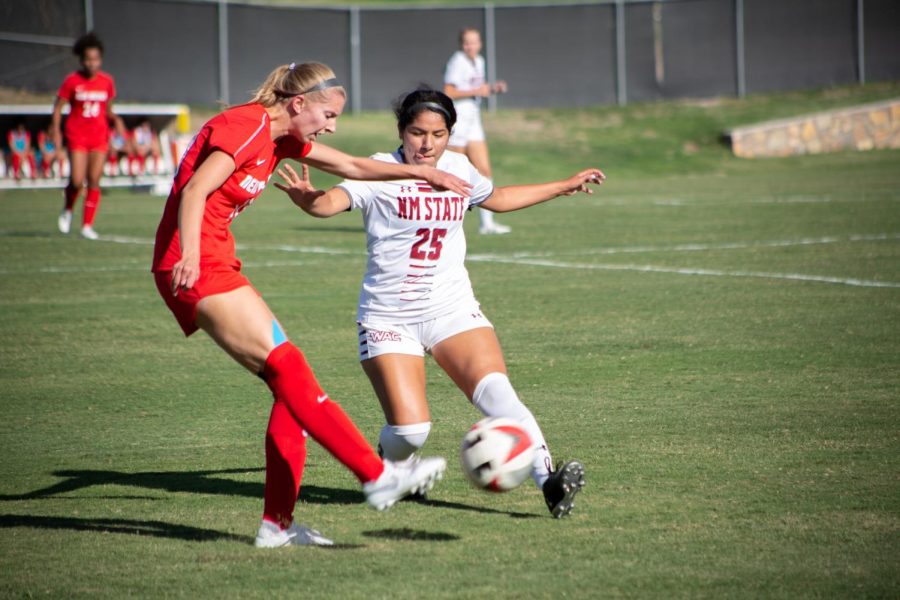 The New Mexico State soccer team concluded its season in what will go down as an all-timer, coming up just short in an upset bid against No. 1 seeded Utah Valley in the program’s first ever penalty shootout.

After falling behind early, the Aggies came within one penalty pick away from advancing to their first-ever WAC Tournament Championship, resulting in a heartbreaking but encouraging end to NM State’s season.

The tone of the match was set within the first minute, when the Wolverines made a fast break up the line and crossed it in for an unsettlingly easy goal past NM State goalkeeper Dmitri Fong, but the Aggies would not fold at the sign of adversity.

Not far after the Wolverine attack, NM State forward Hannah Leitner laid a gorgeous ball up to Corey Kizer who was able to hit it in for the tie in the 21’. From then on, it was a pretty back and forth game — the level of play that is expected in a WAC semifinals match.

Although Utah Valley had a plethora of shots on goal opportunities that could have easily changed the tide of the game, the reliable Aggie defense that is Xitaly Hernandez, Emma Smith, Hannah Draper and Lece Aviles kept them at bay. The ability to level the play and take back the game was a big motivator, as this NM State team was able to keep the score deadlocked at 1-1 ending the first half.

The second half proved to be a marathon, with head coach Rob Baarts making sure his star forward speedsters got some essential rest time in order to get those attacking chances. Leitner and Ormson really attempted to make those offensive opportunities for strikes, but it proved difficult to get free in the Utah Valley defensive half.

The game continued to be a gritty battle with both teams playing at such a competitive level making it a nail biting match regardless of the lack of scoring. Things got heated as Leitner broke through on a fast break in the 82’ and Wolverine goalkeeper Isabel Jones-Dawe saved it, but when Leitner got the rebound, Jones-Dawe grabbed made contact with the Aggie sophomore’s leg, setting up an opportunity from the spot to propel the Aggies into the championship. Jones-Dawe was given a yellow card as a result of the play, and Xitaly Hernandez got the PK opportunity, but chipped it wide in a devastating game winner attempt.

The tie persisted beyond the 90’ of regulation into two golden goal overtime periods. The back and forth continued throughout, with 11 saves from Fong and 6 from Jones-Dawe setting up for a tight bout of penalty kicks to decide the matchup.

In a brutal five kick duel where the first three PKs were missed, Utah Valley’s Cassidy Mccormick sealed the deal for the Wolverines by a 4-3 margin, pushing lifting the WAC’s top dogs to the conference championship and sending the Aggies home.

This New Mexico State team showed up and really proved their skill and depth until the bitter end on the field. Despite the gut wrenching ending, it was as strong a showing as NM State has churned out all year, giving reason to be excited heading into what forecasts to be a much more by-the-books offseason.