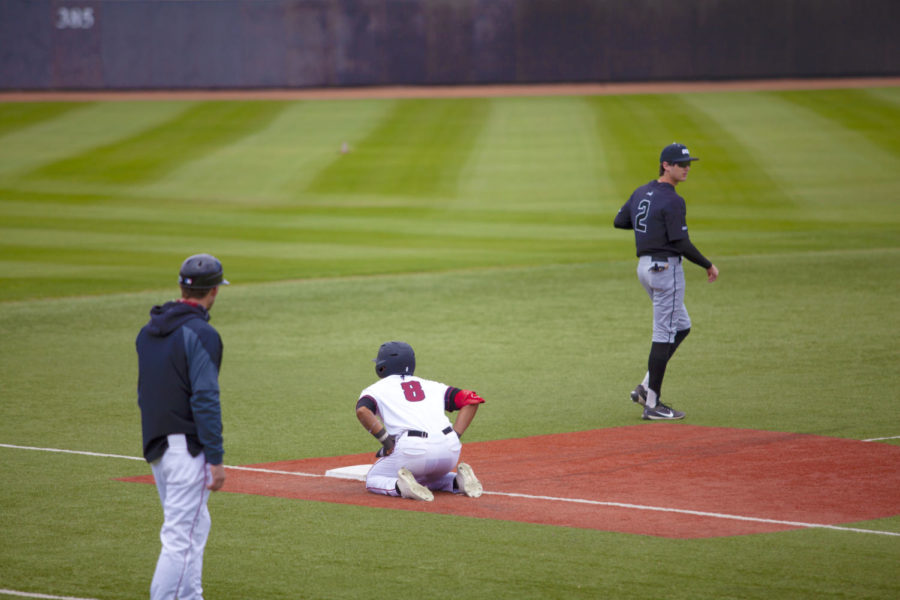 NM State loses its sixth straight after dropping four in a row to the Lopes.

New Mexico State’s struggles in bringing runners home continued Saturday afternoon, with Grand Canyon closing out the weekend series with a 11-3 win to complete the series sweep and drop the ice-cold Aggies to 11-21 on the season.

Today mirrored many of the Aggies’ recent performances, with the team hitting the ball decently, but not translating that to scores, mustering just the three runs late on 11 total hits (compared to 16 hits with an outstanding 11 runs for the Lopes).

After losing Friday’s series opener in tight fashion, yesterday’s double header was a little harder on the eyes, with a sluggish offensive output by the Aggie lineup that saw three runs combined over the course of both games. — the results being 4-2 and 3-1 in GCU’s favor respectively.

To start today’s matchup, starter Cam Blazek (1-2) came out a little shaky allowing two hits in the first with one RBI, but found a rhythm not allowing any hits through the second and third, while retiring four batters.

In the top of the fourth on a short high fly ball right in front of the batters box, the Aggies had a mishap that saw Blazek collide with catcher Jason Bush, as it seemed that neither player called for the ball. Bush would leave the game with an apparent injury somewhere on the left leg.

Following the collision, the Lopes, with bases loaded, got a double off the bat of Johnny Weaver that brought in two runners. Next up, Dane Stankiewicz reached first on a fielding error by third baseman Kevin Jimenez, which resulted in two more scores for GCU.

The Lopes showed no sign of slowing down, as they got another RBI off a single to the right center from Channy Ortiz. The Aggies trailed GCU 6-0 through four.

Keeping all momentum on their side, the Lopes only padded their lead in the fifth. To start it out Juan Colato sailed the ball on a home run hit over left field before two more RBI’s were added on two separate sac-flies to push it to a 9-0 lead.

In what was trending to be a scoreless outing for the Aggies, NM State finally added some runs in the fifth. The first row hitters to start the inning in Cal Villareal and Britt Graham both notched singles on there at bats, followed by a Noah Haupt single that brough in Villareal to give the Aggies there first score of the game.

Adding on more then just one, Jake Baer singled as well, brought home Graham. Finally, Haupt was also brough in on a fielder’s choice, as the Aggies slowly started to climb out of the hole they found themselves in. The lopes still lead 9-3 at the end of the fifth.

GCU would kill whatever comeback attempt NM State could have mounted in the eighth, adding two more RBI to extend things to 11-3.

In the end the Grand Canyon Lopes were just too much for the Aggies all weekend long, marking the first GCU sweep of NM State since 2017. NM State will look ahead to a midweek showdown in Tucson against U of A before getting back to WAC action against Tarleton State next weekend.