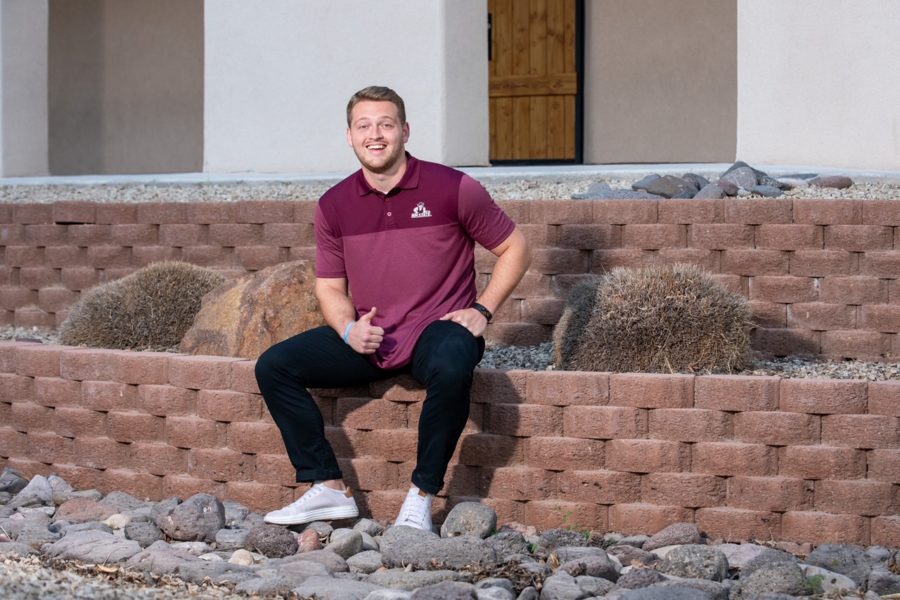 Long-time Round Up Sports Editor James Martin won't shut up about how much he loves his job.

Having spent every moment of my undergraduate tenure as part of the Round Up team, reaching the end of the road hits harder than I’d like to admit, and while I’m not usually one for self-aggrandizement (I’ll do my best to keep it short), I’d be remiss if I didn’t get off some thank yous and share just how much this experience has meant to me.

I remember being brought into the office in July of 2017 by former Editor-in-Chief and dear friend Derek Gonzales to kind of get a feel for the place — I was clearly heavily scouted out of high school — and before I knew it, found myself in an impromptu interview wearing running shorts and Birkenstocks with Derek and my OG EIC Albert Luna. Things went well enough to get hired on the spot — surprising me more than anybody — and from that day forward, I haven’t gone a day without feeling the abundance of support that a workplace like the Round Up provides; booty shorts, sandals and lack of formal experience be damned.

To Albert and Derek — thank you for taking a chance on this sports nerd who had a passion for Shakespeare and cranking out artsy fartsy essays in high school. Sports journalism was never something I had foreseen beyond dreams of appearing on ESPN, so being able to explore the reality of the field, and receive the direct mentorship I was gifted by my man Derbaugh especially, has been something that has shaped my life top to bottom.

A lot of learning was done in year one, but it wasn’t until my second at the Round Up when I really started finding my groove as a writer and got to enjoy the workplace culture that had bounced back so strongly from years past. I’m not a shy guy by nature, so staying reserved for as long as I did to start was a tough thing to deal with, but that outgoing, friendly, familial 2018-19 group will forever have a special place in my heart for what they allowed for me to do from a professional and social standpoint. A lot of lifelong friendships have been made, and I don’t think there’s anything I could be more grateful for.

From participating in girl talk with the likes of Aimee Ryan, Ari Parra and Marianne Salas, getting my birth chart hyper-analyzed by the incomparable Jensen Stell and grilling the Bachelor with Kayla Cass, Myra Rommes, Katrina Chandler and Tea Davidson, to sharing an office with my kindred spirit Leah Romero and getting roped into a post-March Madness heartbreak lunch with Ch’Ree Essary and Alanna Herrera as they carried out their ulterior motive of pitching me an editorial position (mission accomplished ladies) — no moment will go untreasured by me.

The last couple of years have been less than ideal — almost exclusively as a result of the pandemic (don’t know if you’ve ever heard of it), as I haven’t gotten the chance to spend as much time distracting coworkers and messing around during office hours as in years past — but to have built the attachment I have with each person from those groups really speaks glowingly on behalf of everyone who’s rolled through these offices. This especially speaks to the hard work of Alanna, who was able to lead captain so many unsure bodies through some truly uncharted waters over the course of the last 15 months-plus with grace and inspiration. I wouldn’t have stuck around as long as I have if not for Alanna, so please, go thank her and show her the love that she deserves.

I’ll refrain from writing a column about each member of the staff, as I’m sure those dealing with the financials wouldn’t appreciate me writing beyond my time on payroll, but I’ve been able to take something from every single person I’ve come in contact with through the Round Up, and will carry those experiences fondly with me through the rest of my life.

Extra special shoutouts are in order for the sports department of which I’ve worked so closely with over the course of my four years, with my original partner Jonah Gallegos, Mia Tontodonati, Trent Nickell and Shelly Doyle all making the job as easy as it was fun.

The teams, coaching staffs and athletic department at NMSU, led by the legend himself Mario Moccia, couldn’t have offered a better four years of access, content, generosity and entertainment than what I was afforded, with countless pleasant interviews, WAC Championship after WAC Championship and a once-in-a-generation bowl victory to hang my coverage hat on. Media relations GOATs like Ty Stevers, John Vu, Chris Kennedy, Oliver Grigg and Charlie Hurley have done more for me and Las Cruces’ sports consumption world than I probably even realize, and getting to work with them alongside the likes of my man Jason Groves, Mark Rudi, Justin Martinez, Ken Sickenger and Colin Deaver set up for what was always an enjoyable and memorable experience.

THANK YOU READERS if you’ve made it this far, for giving student journalism a worthy platform and making all the hard work the thousands of these young writers tirelessly produce worth while. And to my mom, dad, sister and extended family, who I’m sure accounted for half of my page views — you guys are the best.

The column is all vibes, no edits at this point, so I will do my best to reign it in and land this puppy ASAP. I hope I’ve been able to convey the love I have for the Round Up and all the people that working here has allowed for my path to cross. Whether I ever tweet another word about about sports or not, I am confident in saying this is one of the best jobs a college kid could ask for, and I’ll miss this place and the people I’ve grown to love through it dearly. Thank you guys so much.