NMSU Round Up • August 31, 2021 • https://nmsuroundup.com/18019/politics/asnmsu-appoints-new-senators-during-first-meeting-of-the-semester/

ASNMSU appoints new senators during first meeting of the semester 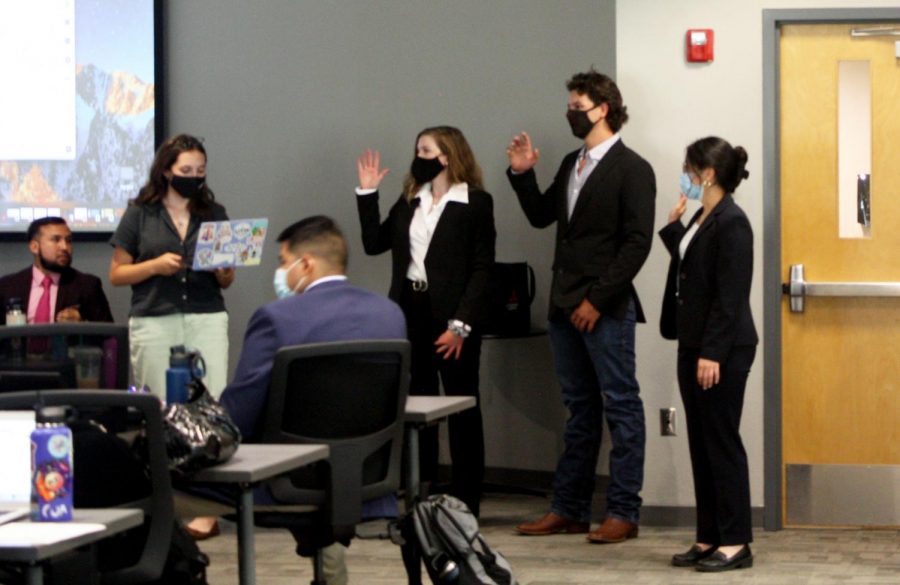 Senators Sarah Roderick (left), Caleb Doss (middle) and Sophia Annette Pettes (right) were sworn in on Aug. 26 in the first meeting of the 65th Senate.

The 65th Senate of the Associated Students of New Mexico State University appointed new senators, approved in providing funds to the NMSU Cheer team and decided the new positions in their Special Committees branch on August 26 in their first general meeting in person at the Corbett Center’s Senate Chambers.

Substitute Bill 1, which provides money to NMSU Cheer, was given a due pass through Senate. Initially, the bill was going to provide the team roughly $23,000 to fund for their activities. Due to legislation in the ASNMSU Lawbook where senate can only approve to allocate about $17,000 per fiscal year.

Engineering Senator Andrew Pantoja, who introduced the bill, said he reached out to NMSU Cheer after the bill’s passage and said they are still “excited” for the funding.

“I’m just glad I stepped in to help them,” Pantoja said.

NMSU Cheer is comprised of 44 students, 16 males and 28 females.

The Senate also decided on this year’s Special Committees positions:

This is the first meeting in the last two years where Senate meets in person, where they were only held through Zoom in order to follow COVID-19 pandemic restrictions and social distancing protocols.

“Not only will the meeting help the senators be better at their position,” ASNMSU President Pro-Tempore David De La Cruz said. “[The meetings] will also effect the students directly because they are able to get to view more of the discussion into what they are seeing in front of them while we can further deliver on the bills and reimbursement that we are providing various organizations.”

ASNMSU President Matthew Madrid said he felt refreshed to see legislation being conducted in one room.

“Just being in person fosters a lot more discussion than we ever had in the Zoom,” Madrid said. “Having meetings like this, hopefully, for the rest of the semester and into the spring is really going to help in bringing out more voices and concerns.”