NMSU Round Up • September 7, 2021 • https://nmsuroundup.com/18065/sports/aggies-football-struggles-vs-sdsu-continues-search-for-first-win/ 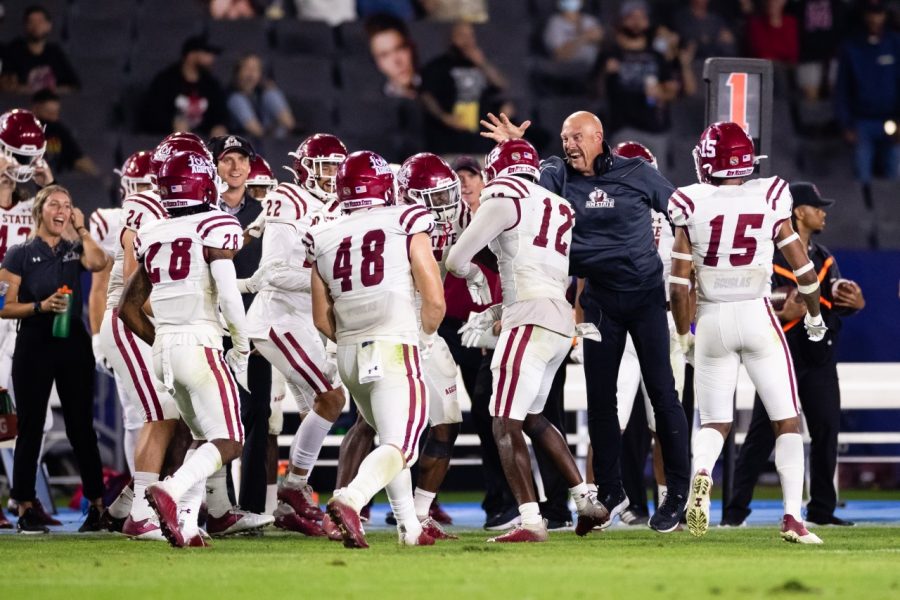 The Aggies celebrate after an impactful first half of play. (photo contributed by NM State Athletics)

The New Mexico State football team traveled to their first away game against the San Diego State Aztecs. The NMSU Aggies started off with a strong lead in the first half and then slowed down to eventually lose 28-10. For several Aggies, including junior quarterback, Jonah Johnson, this was their first collegiate travel game and that proved to be difficult. The Aggies were the first on the scoreboard but failed to keep up with the Aztecs in the second half and were severely outscored. A lack of offense in the second half and subpar defensive effort throughout led to them being handed their second loss of the season, now dropping to a measly 0-2 on the year.

The Aggies had one more game than SDSU under their belt this season, but this meant the Aztecs could prepare a game strategy by watching the Aggies’ tendencies through film study.  Although the Aztecs are known for their strong defense, the Aggies combatted this with a strong offense early on in the game. Led by the junior quarterback, Jonah Johnson, the Aggies got on the board quickly, scoring a 31 yard field goal by Redshirt Sophomore kicker Ethan Albertson. At the top of the second quarter, the Aggies defense capitalized on the incomplete passes by opposing quarterback,  Jordan Brookshire, forcing a turnover later in the drive. In the pregame press conference, Aggies Head Coach Doug Martin mentioned that Johnson needs to read progressions instead of coverage, and that is exactly what he did. Dropping back to pass from the Aztecs eight yard line, Quarterback J. Johnson sent a pass up the middle to junior wide receiver Dominic Gicinto in the end-zone, scoring the Aggies first touchdown of the season.  Though Head Coach Doug Martin’s message to the players heading into the game was that the players “just need to keep believing in each other and in themselves and keep getting better,” this proved to be a bit more difficult for the Aggies to do in the second half of the game.

The Aggies returned from half-time after acquiring a 10-0 lead over the Aztecs, they were unable to put on a show like they did in the first half. The Aggies, still struggling with the entirely new defense, could not defend the Aztecs’ shifty offense. Though the Aztecs seemed to be plagued with unsportsmanlike conduct penalties, they managed to score four touchdowns, three of which came in the third quarter alone. The Aztecs retained many of the old philosophies from previous Coach Rocky Long and maintained an unpredictable offense while the Aggies struggled to execute on their third down opportunities. To further the damage, Aggie quarterback Johnson threw an interception to senior linebacker, Andrew Aleki. This costly turnover then fueled the Aztecs’ next touchdown drive. After this complete shift in momentum in favor of the Aztecs, the Aggies had given them too much leeway, and it was now impossible for them to catch up. The game finally concluded with a score of 28-10 in favor of the Aztecs, after the Aggies went scoreless and allowed four unanswered touchdowns in the second half alone.

In the post-game press conference, Aggies Head Coach Doug Martin explained his take on the game, talking about the touchdown pass disputed by a penalty and a catch in the end-zone that was deemed out of bounds. But, in the game of football, there will always be the plays that should have been called or should not have been, and there is no way to go back and change it. Ultimately, the Aggies will look to put this game behind them and come out with more excitement and energy for the much anticipated “Battle of I-25” rivalry game against the University of New Mexico’s Lobos this upcoming Saturday on September 11th.