NMSU Round Up • October 8, 2021 • https://nmsuroundup.com/18399/news/nmsu-faculty-senate-proposes-resolution-to-remove-the-president-and-provost/ 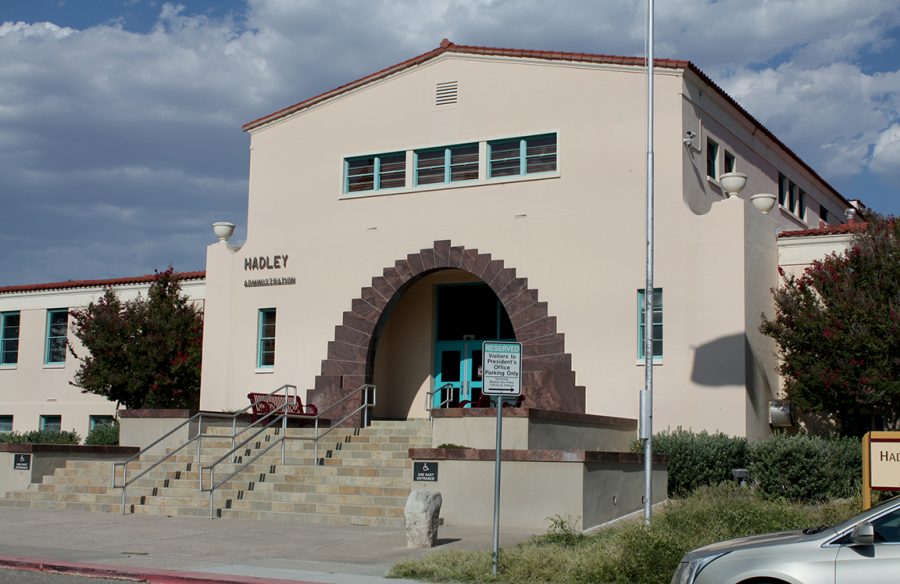 Hadley Hall, home of Human Resources and the Administration and Finance office.

Corrections: This story was updated on Wednesday, October 13, 2021. The previous edition of this article misstated Jaime Bronstein as chair of the Diversity, Equity and Inclusion Committee. The name has been changed to appropriately address Mayra Valadez as the actual chair for this committee.

The 18-page document, sponsored by eight faculty senators, shared collected data and information for subjects such as:

The proposition provided examples to these claims such as the salaries of certain positions, non-advertised promotions and/or hires and lack of accountability.

NMSU Professor and Faculty Senate Vice Chair Jamie Bronstein is one of the supporting sponsors of the resolution. She said the idea started in the beginning of the summer due to frustrations and lack of cooperation from higher administration.

“It seems like the only thing that was going to have any impact is a vote of no confidence,” Bronstein said.

The proposition requests for the NMSU Board of Regents “protect” the university’s commitment to shared governance by “ensuring that NMSU administrators follow written policies. It also asks for BOR to “direct” Chancellor Dan Arvizu to remove President John Floros and Provost Carol Parker from their positions.

“[Arvizu] is the one who has the power over the other members of the administration,” Bronstein said.

During the meeting, the resolution was assigned to the Diversity, Equity and Inclusion Committee, which is chaired by Associate Professor Mayra Valadez.

A student, who asked to be left anonymous, from the College of Agricultural, Consumer and Environmental Sciences stated they have lost confidence in the university’s care for the students and the resolution does not surprise them. They stated for the sake of alumni, students and faculty members that the President and Provost set a better example.

However, the student said they hope action will be taken against the Floros and Parker. They said university leadership focuses on “themselves and fattening up their wallets” instead of the students.

“It should be about wanting to put in that funding to help the students with their future careers and with essentially our own money being taken away from us just to give someone else a job, a job that isn’t even necessary. It’s not right,” the student said.

During an open forum in the Oct. 7 Associated Students of New Mexico State University Senate Meeting, Senator Garret Moseley spoke on the matter relating to the proposition. He addressed the misappropriation of student funds. As of April 2021, the university leadership hired 12 administrative positions with salaries equaling $1,793,321.

“Everyone here [ASNMSU Senate] can agree the number one priority of the university should be its students,” Moseley said. “This is unacceptable in regard to where these funds could be appropriated.”

The proposition is slated to be further discussed in early November in the next faculty senate meeting. As of writing this article, when asked for a comment from Chancellor Arvizu, he said a statement will be provided in the near future.