NMSU Round Up • October 26, 2021 • https://nmsuroundup.com/18537/round-up-lifestyle/valdimar-johannssons-lamb-movie-review/ 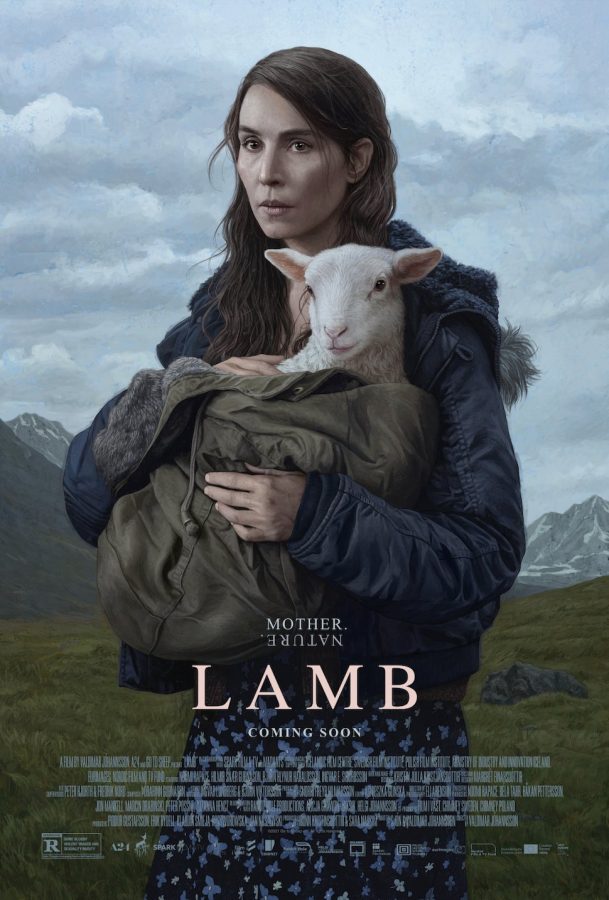 "Lamb" movie poster, courtesy of A24.

Valdimar Jóhannsson’s directorial debut of the Icelandic film “Lamb” is beautifully shot with interesting premises and ideas that don’t stick the landing.

“Lamb” is about an unhappy couple, María (Noomi Rapace) and Ingvar (Hilmir Snær Guðnason), living in their farm in Iceland when one of their sheep gives birth to an incredibly unnatural lamb, which they decide to raise. The film is separated into three chapters and that quick synopsis takes place in the first third. What comes in the next chapters is about whether what this couple is doing is the right thing in a moral and natural sense as they are challenged and even threatened by both aspects throughout the story.

While “Lamb” is categorized in the horror and fantasy genre in Rotten Tomatoes, it should be stressed that it is not the case, as implied by Jóhannsson in an interview with Variety . When watching the movie, you get more of the idea that “Lamb” is a drama with hints of horror, which isn’t a negative to the movie whatsoever.

What can be the decisive factor in “Lamb” is the pacing. Even with only an hour and about 40 minutes in runtime, the film is a slow burner. The story gives time to show the day-to-day chores and activities the couple does from feeding sheep and helping them give birth. We aren’t shown their motives or conflict until the middle of the film. All while there is little to no dialogue. For the viewer, this will either be annoying with how dragged-on a scene feels or feel rewarding for having the patience in unfolding the plot through its revelations.

What should be praised about “Lamb”, being Jóhannsson’s first film, is the impressive cinematography. From the landscapes of Iceland to the shots of the characters just doing mundane task are nothing short of magnificent that showcases the director’s artistic talents. There are also shots solely focused on the animals where they have vibrant expressions from panic, tired and curiosity, like they were paid actors. A choice that elevates the themes of nature in the beginning of the movie.

The human actors in “Lamb” do an amazing job also from doing the farm work to interacting with each other, there was a natural sense to their acting that felt realistic. Then when emotions do get high, they’re shocking and a highlight.

Then there’s the lamb, the creature in the story the couple raises. It is impressive how the film managed to balance practical effects and computer-generated imagery (CGI). The lamb’s presence, while considered unnatural in the story, doesn’t feel inorganic to the overall organic tone in the movie.

In its narrative, “Lamb” presents a lot of interesting ideas throughout its runtime but doesn’t execute or end well. The film does take its time to explore the dynamic between the lamb and the couple, which even expands with the inclusion of Ingvar’s brother, Pétur (Björn Hlynur Haraldsson) in the second chapter. But that addition leads to ultimately nowhere as his character arc just ends in favor to the main narrative, making Pétur’s role irrelevant overall. Which feels like the story only had him so the plot kept going for longer in a movie that could’ve ended 30 minutes early. Which then plays to how much of a chore it is to see this movie to the end with its slow pacing. By the time the movie does get to that ending, the viewer has already lost interest.

“Lamb” is an interesting film that tackles subjects of parenthood and nature, questioning the viewer if what is happening is wholesome or eerie. The film is carried by its stellar cinematography and initial premise but doesn’t manage to drive it home with a resolution that takes forever to get to yet feels abrupt when it does end. The focus on the family was the right choice in providing this mystery to the anthropomorphic lamb but takes a big stop in the middle when the brother enters the story. Reaching to an ending that should astonish the viewer, but rather feels undeserved.