NMSU Round Up • October 26, 2021 • https://nmsuroundup.com/18539/showcase/nm-state-soccer-secures-win-against-lopes-in-elite-golden-goal-fashion/ 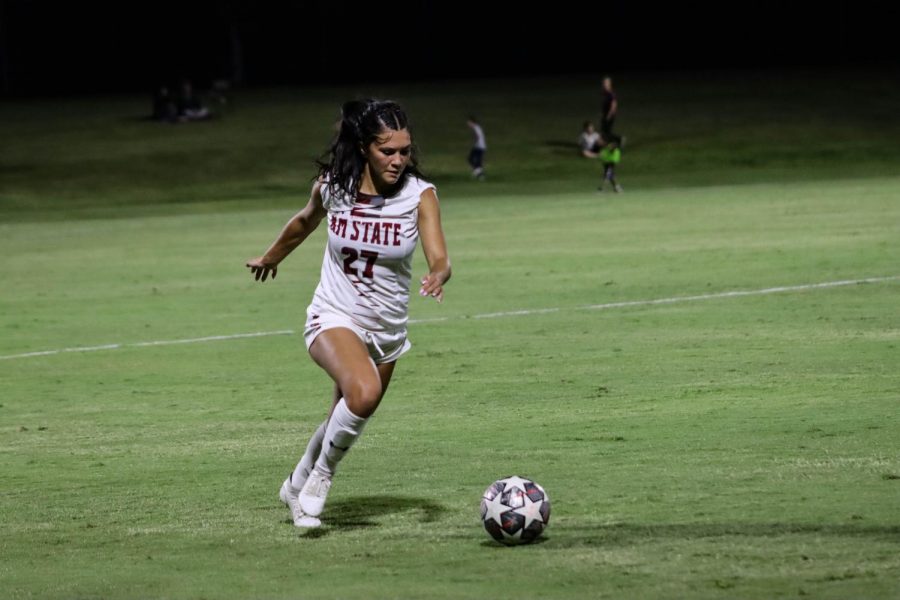 The New Mexico State soccer team had the NM State Soccer Athletic Complex left completely speechless after a nail biting win over the Grand Canyon Antelopes Saturday evening. This marked the end of the Lopes eight match unbeaten streak. Additionally, with both teams being leaders in league play, the Aggies handed the Lopes’ their first WAC loss of this 2021 season. It’s games like these that remind fans and players what the game is all about and how riveting those golden goal moments are.

The entirety of the first half was a scoreless battle with neither team being able to secure that early upper hand. Flowing into the second, GCU controlled the offensive play pretty consistently giving NM State keeper Makenna Gottschalk her fair share of action. She had a phenomenal game, stopping seven of the eight-on-target shots on goal throughout the double-overtime match. Tallying these additional saves to 137 under her belt, Gottschalk is now ranked fourth all-time in the history of NM State women’s soccer. Eventually, the pressure paid off when the Lopes’ secured their first score in the 59’ when Hannah Edwards hit a beautiful header off of Marleen Schimmers corner kick giving them the 1-0 lead. The Aggies quickly gathered their offensive power to answer as Loma Mcneese set out to equalize with a gorgeous 25-yard bomb to the upper right corner of the net in the 79’. With nothing but back and forth for the remainder of the 90’ match, the competition carried into an exhilarating 20 minute overtime.

With fear of the match going into penalty kicks with the majority of the double overtime coming to a close, Senior Grace Olson picked up her first goal of the season as well as her collegiate career second to seal the Aggie victory. An ill placed clearance by the GCU defense landed directly at the feet of Olson who soared a right footed strike hitting the top of the crossbar and landing just over the goal line with only 15 seconds to spare. Showing much improvement from the last matchup against GCU, these two goals scored by NM State matched the highest total scored by an opponent against GCU this season.

“We kind of got smashed last time we played these guys at GCU. They took it to us and before we even knew about being in the tournament we wanted to prove we were in the tournament because we deserve to be not because someone else lost.” Coach Rob Baarts continued, “At that point in the game you get a good touch and get something on target, cause you just don’t know. To be fair it was a super fortunate goal, hits the crossbar, hits the keeper I mean sometimes you just gotta take those rolls and that’s why you put it on target if you don’t put it on target you don’t get those chances.”

The Aggies have assured a spot in the 2021 WAC Tournament and will take on WAC West Division co-leader Utah Valley at home Thursday at 7:00 p.m. This Rob Baarts team will look for another redemption match with the most recent game against the Utah Valley Wolverines being a 0-2 loss.