“The Hill” Part One 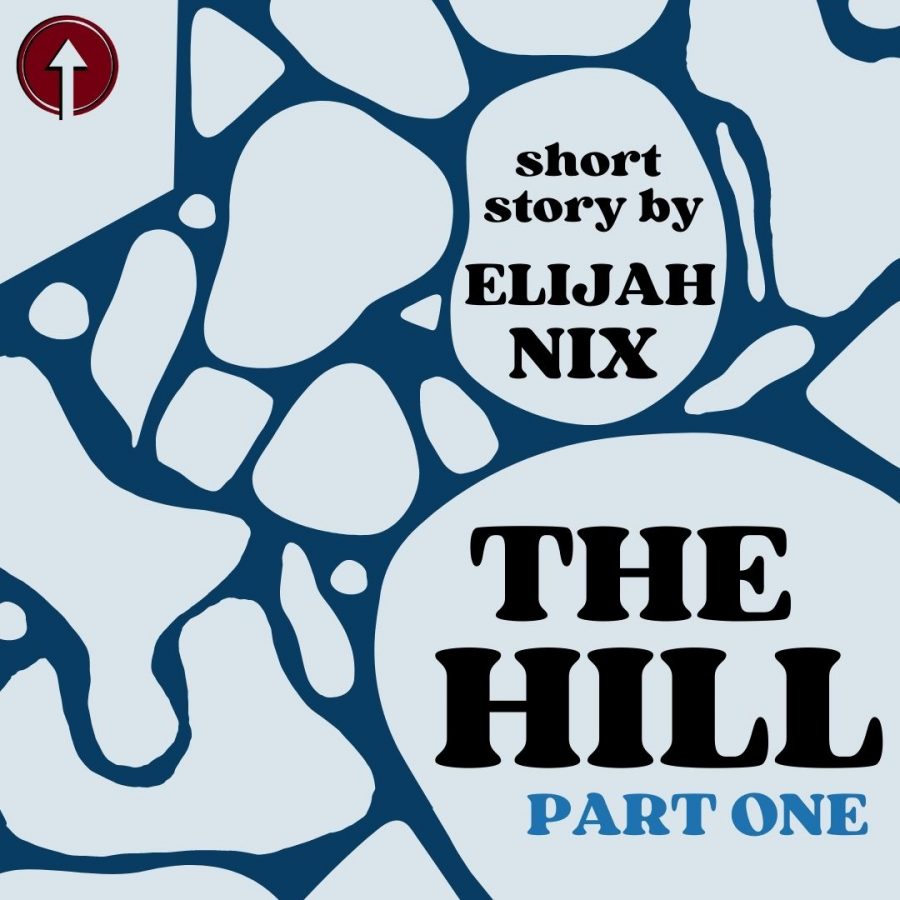 Illustration created by Victoria Valle, marketing coordinator of The Round Up.

The Hill is a short story written by The Round Up staff member, Elijah Nix. Due to its length, the complete story will be published in three short segments each week.
For so long, my world was coldness. It was not light nor was it dark, but grey; a foggy prison of discomfort. I lay on my side alone, the ground’s ice freezing and damaging the skin which pressed against the floor. The rags I wore and my curled-up body were poor defenses against the overpowering, low temperature. The air around me stole my body’s movement, and left me frozen.

Upon my flesh appeared sporadic splotches of discolored skin, symptoms of a body damaged by the cold. My left foot refused to move or feel. It was the same state of the fingers on my right hand. My lips were chapped and raw, and my eyes felt sliced when opened.

I rarely rose from my hard, cold bed. I had no reason to do so. I never ate, which forced me to reserve the small bit of energy I had for waking after each bitter night of sleep.

Such was the pattern of my life. I would wake after sleeping, lay in my cave, and yield myself to sleep once again. Repeat, repeat, repeat. Nothing ever seemed to change.

But one night, something did change.

On one particular night, I experienced a sensation I hadn’t known in a long time.

Usually when I slept, there seemed to be no time in between when I slept and when I woke. I would close my eyes, sleep would take me, and in an instant I would wake.

However, this night was different. When I closed my eyes I woke not to my icy fortress, but in a blurry scene caked with light. Though I could not see clearly, found my body felt full of energy and was absent of injury. I rose and perceived a large body of water on the horizon and I felt sand underneath my feet.

These were shocking shifts in scenery to be sure, but the most shocking change was the sensation I felt emanating through and out of my body. I had no word for it at the time. I could only describe it as the opposite of the cold I had been enslaved to before arriving on this joyous shore.

I looked to my side and found two towels spread neatly in the sand. Intuitively, I knew one was mine, but to whom did the other one belong to?

I then woke in my icy wasteland, and felt the cold rush back into my body. For a moment, I was befuddled at what had happened. How could I travel from a prison to a paradise and back to a prison without knowing or remembering the means? How could I move in my sleep?

I found that my vision was clear once again When my wit returned, I realized that I had experienced a dream.

I hadn’t experienced a dream in a very long time, and from what I remember, my dreams of the past had been filled with horror and beastly monsters. I didn’t know someone could dream pleasant dreams.

When I came to this realization, I wanted nothing more than to go back to sleep, to dive into a world of comfort and wonder once again. I was unable to and grew frustrated. I had never experienced anything besides cold. How could my sleeping mind conjure something not cold?

I wrestled with these thoughts in my mind. Each hour, the longing for the paradise increased. I traversed from anger to sadness many times.

For so long, I had accepted the wasteland as my dwelling, not knowing what was beyond. Perhaps this place I had dreamt of was real? Perhaps there was more than chill and waste? The thought excited me.

Eventually, hours later, my fatigue outgrew my excitement, and I fell asleep once more, instantly waking where I had slept. This night, there were no lands of dreamy paradise. No dreams at all.

I spent the day on the ground angry and longing, just as was true the previous day. My longings grew every hour, and I became restless. The thought that this paradise might be a real place in this world gnawed at me.

I then looked at my legs. They were clearly atrophied. I tried to move my right foot and found that it responded. I tried my left foot and, to my surprise, it twitched slightly. If my legs were able to move, maybe I could travel. Maybe I could search for the place in my dreams.

I moved the rest of my body. I was like a stone statue, slowly moving its joints, crumbling to life. Most of my skin could not feel, but as long as it could move and hold my innards where they belonged, I was satisfied.

I slowly pushed my body onto my feet, trying to find balance. I failed and landed on my side. I felt a slight soreness ripple from my ribs. I tried again, and felt it on my side once more. I continued to try, clenching my teeth, motivated by my dream.

Eventually, I successfully stabilized myself and felt confidence grow inside me.

After taking a few paces, I looked back at where I had been lying. The ice showed no outline in its floor. No one would have suspected a body had been there for years.

I turned back and took more paces. My icy bed became consumed by thick fog behind me.