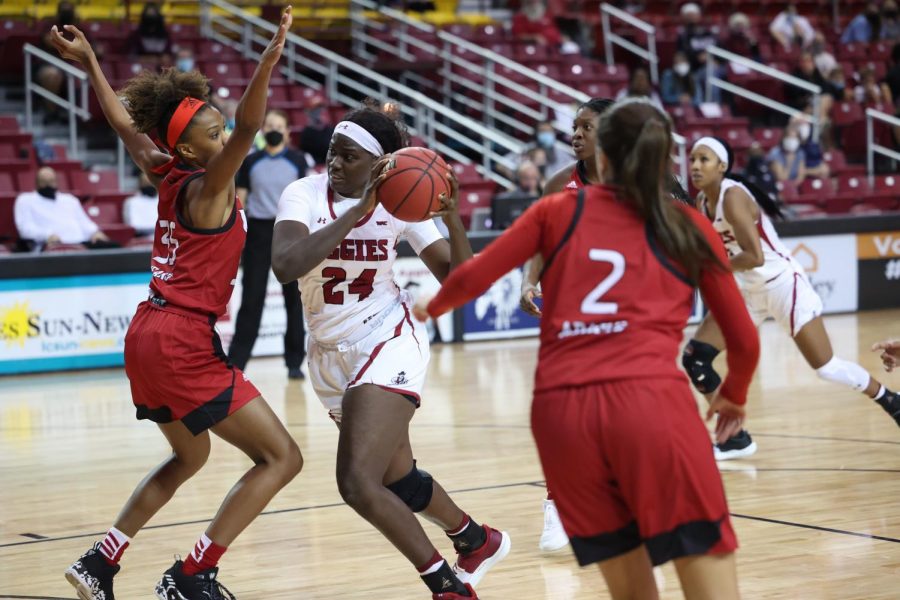 Graduate student and center, Bigue Sarr, playing her second match as an NMSU Aggie against UIW.

The Aggies women’s basketball team walked into the Pan American Center on Saturday evening with a 1-0 record and heading into their first Division 1 matchup of the season. The week prior, the Aggies achieved a resounding victory over the Division 2 Western New Mexico Mustangs with a score of 94-40. NMSU looked to continue this strong display of offense against the University of the Incarnate Word Cardinals.

The game started off very slowly for both teams. Through the entire first quarter, both the Aggies and the Cardinals were held to single-digit points. The score read 9-6 in favor of Incarnate Word at the end of the first quarter, with the Aggies shooting an abysmal 3-16 from the field, or roughly 18.75%.

Though these were some unimpressive offensive numbers for NMSU, the Cardinals did not fare much better, as they shot 4-12 from the field and 1-6 from three-point range. Both teams would look to find their stride on offense going into the rest of the game and continuing playing high-pressure and tough defense on the other end.

As they headed into the second quarter, both teams began to find better rhythm on offense, but the Aggies would find a bit of an advantage in that department. NMSU was able to convert on a high percentage of their offensive opportunities and established a more stout and solid approach to their defense. This led them to outscore the Cardinals 16-13 in the second quarter, bringing the game to a score of 22-22 heading into half-time, filling the Aggies with a bit more confidence and motivation than before.

This new-found aggressiveness on both sides of the ball for the Aggies continued on and even increased as the third quarter got underway. The Aggies held the Cardinals to just 12 points in the quarter as they found 19 themselves, leaving the score at 41-34 with NMSU on top. This was a much-needed momentum shift for the Aggies, part of which was initiated by sophomore guard Taylor Donaldson, who had 8 consecutive points in the third quarter that amassed a sizeable lead for NMSU over Incarnate Word.

NMSU entered the fourth quarter with a solid 7-point lead over the Cardinals, but they couldn’t become too comfortable against the tough Incarnate Word team. The Aggies needed to play the fourth quarter just as well as they had played the third, and they did just that.

UIW looked to get right back into the game quickly after the first buzzer, as they brought the score to 43-43 with 6 minutes left to play. This response was quickly answered by the Aggies. However, as 3 unanswered layups brought the margin back to six points, a margin that the Cardinals would not be able to overcome for the duration of the game.

The Aggies finished this game with a well-earned 58-47 victory over the UIW Cardinals. Graduate Student and center Bigue Sarr lead the team in scoring with 14 points in her second game as a New Mexico State Aggie. Taylor Donaldson followed closely behind with 13 points of her own, bringing a much-needed boost of offense off of the bench for the Aggies.

The women’s basketball team will look to continue this success as they march deeper into the season. The Aggies will head to the Don Haskins Center in El Paso, Texas to face the UTEP Miners in the classic “Battle of I-10” rivalry bout on Wednesday, Nov. 17, at 7 p.m.