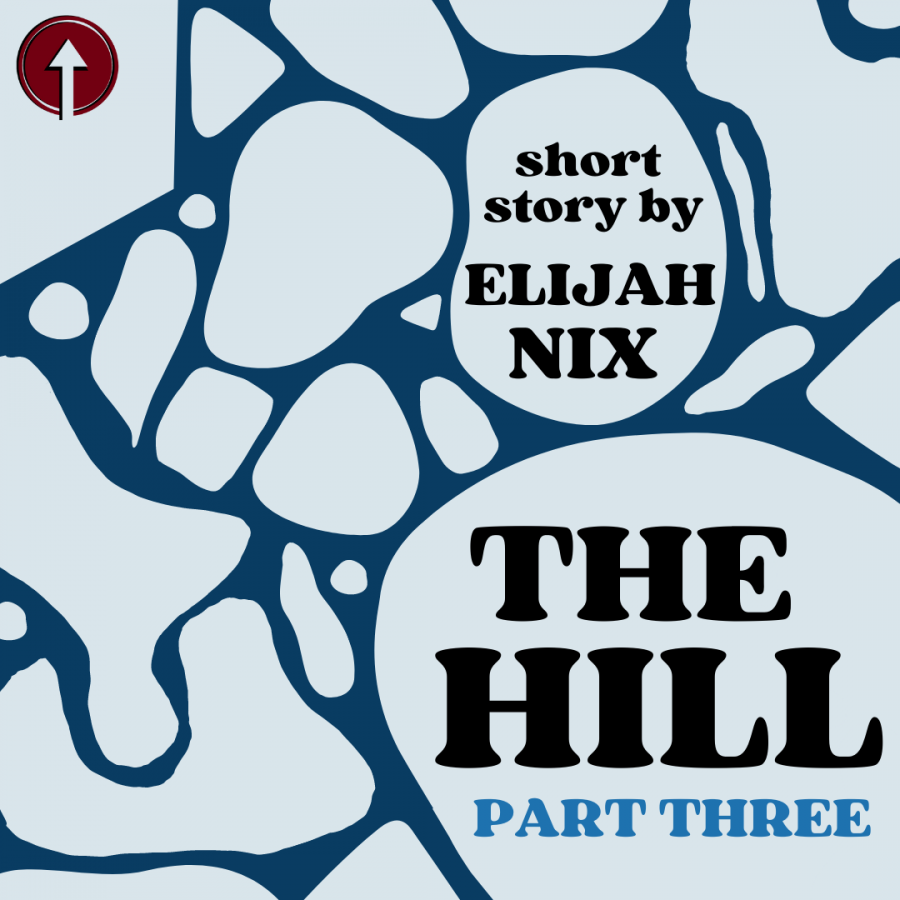 Illustration created by Victoria Valle, marketing coordinator of The Round Up.

This dream was by far the longest and presented the strongest form of anti-coldness yet. There had seemed to be something missing in the previous dreams. Now I knew it was more than I could know. Anti-coldness was not something only found in the light, and neither was it something found only in the dark. Anti-coldness was something that could be felt in the body, not just from the air or from covers, but from another person. In fact, it was that type which seemed most powerful.

I now understand why the dreams had duplicated supplies. The towel, the chair, and the blanket. They all belonged to one another. They belonged to someone else whose presence existed in the peripheral view of my slumbering fantasies. They belonged to the woman.

I rose from the ground, wiping frosted tears from my eyes and frosted snot from my nose. I clenched my fists and continued walking. Strength pulsed through my legs, torso, and arms.

A mere three days ago, I could barely move. Now, I was stepping with power. It was not a physical type of power, but was stronger and deeper, and seemed to come from my dreams.

For the majority of my travels thus far, the ground had been icy and flat, though I would occasionally stumble upon some muddied snow or dark slush. The thick fog remained, and the scenery was static.

Now, the slope of the floor began to incline. I found my legs exerting more and more energy with each step, and my breathing became heavy. The ground below remained icy and cold, but as the elevation increased, the heavy fog began to thin. I was able to see more of my surroundings, though snow and ice were the only sights on the horizon. Light was now able to break through some of the fog, but I was still very cold. I continued.

Sometime later, fatigue forced me to take a break. I sat down in the ice and caught my breath. It was becoming harder to breath.

However, I quickly discovered that a change in scenery had taken place where I was treading. My eyes had been so preoccupied with my feet that I hadn’t been able to catch the brown and green structures which seemed to be stabbing out of the ground.

I had never seen one before, and now they were sporadically placed in my surroundings from a faraway distance. The structures appeared to be green, cone-shaped objects with a brown block underneath. When seen up close, however, one could see that they were actually mostly brown with brown appendages which were coated in little green needles. They smelled amazing.

After my breathing was restored, I rose from my seat and continued my trek. The more I walked, the denser my surroundings grew with these green, needly structures. At first, it was exciting, but it soon proved somewhat disorienting. I could no longer walk in a consistent direction. I had to circumnavigate the scenery, ducking under the structures’ arms or climbing over the remains of fallen structures. At one point, I tripped over part of a structure hidden in the snow, and my flesh began to bruise. I felt tiredness develop within me, and my body began to grow sore.

Suddenly, in a single instant, the thickness of the structures turned to nothing, and the incline became flat once again. I was now in a patch of barren land, still frosted with snow.

The patch of land appeared to be in the shape of a circle, and its area was about the size of a small courtyard. It was completely silent, and though there was nothing to be seen, I felt a form of transcendent weight fall upon me. I was standing in a place I would remember.

From the dense thickness of the structures on the other side, I heard a crunching of snow and the breaking of thin structures. The sound shocked me. Not wanting to flee, I stood still. I couldn’t see well enough into the thickness and couldn’t see what was making the sound, but it seemed to be something about my size.

I then saw a frail-looking woman emerge from the thicket. For a moment, she did not see me.

She was tall, malnourished, and had a matted bush of curly hair flowing from her scalp. She had the scars of the cold on her skin, and it appeared that her legs were weak.

She then looked up, and we locked our eyes together. We were both silent and frozen for reasons we didn’t seem to know. There was something in the way she looked at me which told me that, though we had never met, she desperately recognized my face.

I felt the same way.

In that moment, for a reason I will never understand, my mind revealed to me the word I had been searching for since my first dream, perhaps even before. The same process seemed to occur simultaneously in the young woman, for when we found the word, we said it to each other through ragged voices.