NMSU Round Up • February 10, 2022 • https://nmsuroundup.com/19072/campus-life/office-of-the-provost-transitions-to-oversee-nmsu-graduate-school/

Office of the Provost Transitions to Oversee NMSU Graduate School

Office of the Provost Transitions to Oversee NMSU Graduate School 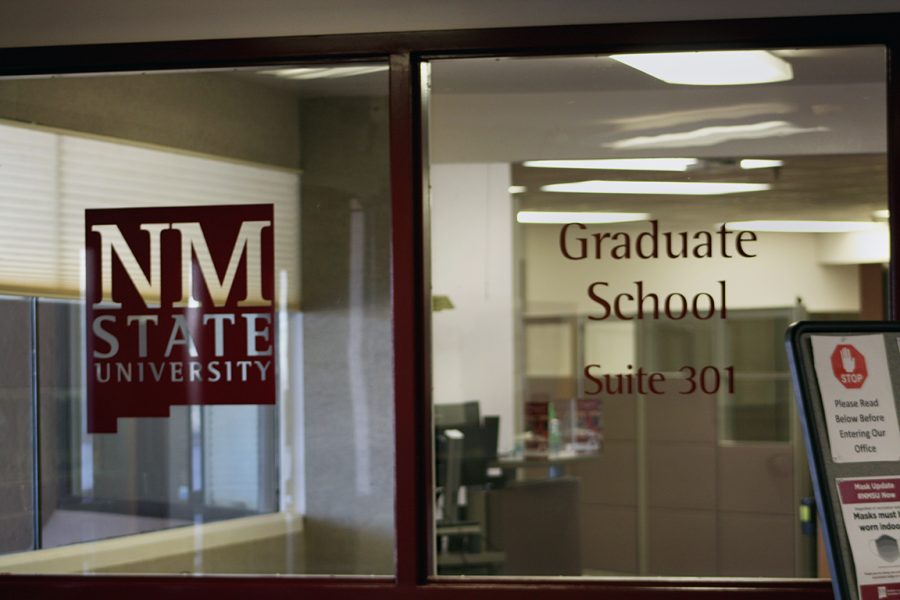 The window of the graduate school office in the Educational Services building.

On Jan. 7, New Mexico State University Chancellor Dan Arvizu introduced a new organization plan which followed the decision to transition the university and NMSU system as a whole to a one leader structure.

The former Acting Provost and current Vice President of Student Success, Dr. Renay Scott explained that this was a “natural change that needed to happen” following the merge of the President and Chancellor position.

“I really, really look forward to working and hearing from Faculty Senate on how they think this could look, how the Graduate Student Council thinks it could look and then how the overall Graduate Council sees ideas. I think there’s some good ideas and I think this is the natural evolution of an external review of the Graduate School that happened in the fall of 2018,” Scott shared.

Third year counseling psychology doctoral student Ellen Ijebor explained that, the major concern she currently has is “How the Office of the Provost going to make sure that the graduate school is being given the appropriate attention it needs.”

“I would love to see a plan that clearly outlines where the graduate school fits amongst the other responsibilities of the Office of the Provost, what this transition will mean and look like, and what will be done to make sure that the issues pertaining to the graduate school do not slip through the cracks,” Ijebor said.

Following the new changes in organization, Vice President for Research and former dean of the NMSU Graduate School Luis Cifuentes will begin to lead the Office of Research, Creativity and Strategic Initiatives.

In the Jan. 2022 edition of NMSU Research and Graduate Digest, Cifuentes wrote a report announcing to readers that the graduate school would be reporting to the Office of the Provost.

In the report, Cifuentes explained that even though a majority of the recommendations in the Nov. 2018 Council of Graduate Schools external review were addressed, he admits to leaving outstanding tasks.

“Next steps include a more strategic use of I&G funding for graduate assistants, greater resourcing, both internal and external, of graduate student tuition and health care cost, and the strategic use of data for marketing and recruitment purposes,” Cifuentes wrote in the report.

Ijebor explained that she would like to see a permanent Graduate School Dean hired in the future but would like to ensure that students have a “significant role in the hiring process”.

“The biggest improvements I would like to see are all the things the graduate workers union [NMSU FIGHT] have been repeatedly highlighting and asking for such as: tuition remission, healthcare, and better funding opportunities and working conditions for graduate students and assistants,” Ijebor said.

“I would also like to see more clear, streamlined, and institutionalized processes for things such as: setting up thesis committees, degree requirements and information, seeking graduate assistantships (e.g., a database), and steps for addressing grievances in the graduate school,” she added.

As of Feb. 9, there are three candidates to be interviewed and a public forum to be held on Feb. 10 for the position of Interim Provost. Scott has been removed as Acting Provost, but remains with her position as Vice President of Student Success. The nationwide search for the permanent position is still ongoing, and NMSU has yet to announce a candidate.