NMSU Round Up • March 10, 2022 • https://nmsuroundup.com/19391/showcase/nm-state-basketball-wrap-up-season-atop-the-wac-making-easy-work-of-utah-valley/ 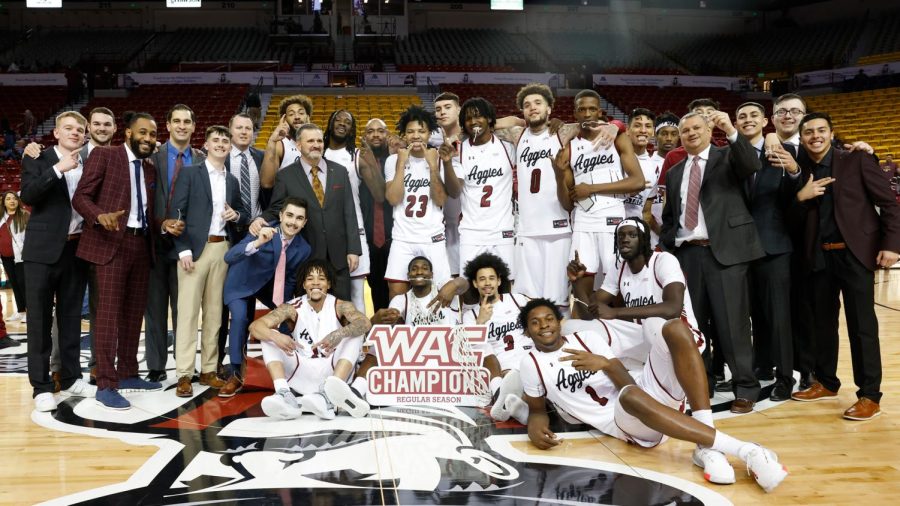 The New Mexico State Basketball squad brought their 2021-22 regular season campaign to a close in a momentous 62-46 win against Utah Valley Saturday evening. The Aggies left the court in elite fashion, reclaiming the WAC regular-season title among a variety of individual player awards and recognitions.

With the win, this Crimson squad secured the number-one seed for the 2022 WAC Tournament notwithstanding finishing in a three-way tie for first place atop the league standings. It marked a historical moment for the four veteran seniors who ended their regular season career with this Chris Jans program. Among the four is hometown hero Johnny McCants, the Las Cruces native who recorded 11-points, 13-rebounds and his second straight double-double game for his last Pan Am win. On top of that, McCants became the first NM State player in program history to win four regular-season championships and gained his spot on the All-WAC Second team as well as a nod to the All-WAC Defensive Team.

With the remaining seniors leaving their mark as well, graduate forward reigning from Auckland, New Zealand, Yuat Alok did not disappoint, coming in clutch at the end of the first half. Being the steady variable he always is, he either scored or assisted on all four of the Aggies final baskets in the last moments of the first. He also recorded all seven of his points in the final 3:39 frame of the first half with NM State heading into the locker room with a six point lead (28-22). Donnie Tillman and Clayton Henry also made good on their final Pan Am game with Henry documenting seven points and Tillman adding to the fray of the power foursome in shutting down key Wolverine players like Fardaws Aimaq.

Teddy Buckets, NM States top point producer, received all-league accolades from the conference by being named the WAC Player of the Year. Adding to the recognitions to notch onto his belt, Allen also secured the title of WAC Newcomer of the Year and was placed on the All-WAC First Team as well as on the WAC All-Newcomer Team. Living up to his name as always, Allen contributed a whooping game-high 20 points (his 15th time hitting the 20-point mark this season) on a 7-of-20 night from the field in the Utah valley win.

The third member of the 1,000-point club (consisting of Allen, McCants and Rice), Jabari Rice earned his spot on the All-WAC Second Team for the second season in a row. The Houston native has always been consistent for this Chris Jans program with a scoring average of 12.0 points per game, as well as putting up shooting splits of .391/.329/.777 placing him second on the team in scoring, and among the frontrunners in the league.

Riding off the WAC title and recognitions, the New Mexico State basketball campaign will head to Las Vegas, Nevada as the top seed in the WAC tourney. This Aggie squad will look to find their niche and continue to top the boards in their journey towards their first NCAA Tourney since 2019 (dependent upon the next two games). Watch them take the court tomorrow night at 7:00pm beginning their first, hopefully of many games working towards the championship and acquiring more victory hardware.