NMSU Round Up • April 4, 2022 • https://nmsuroundup.com/19634/politics/candidates-make-their-case-to-become-new-asnmsu-president-and-vice-president/ 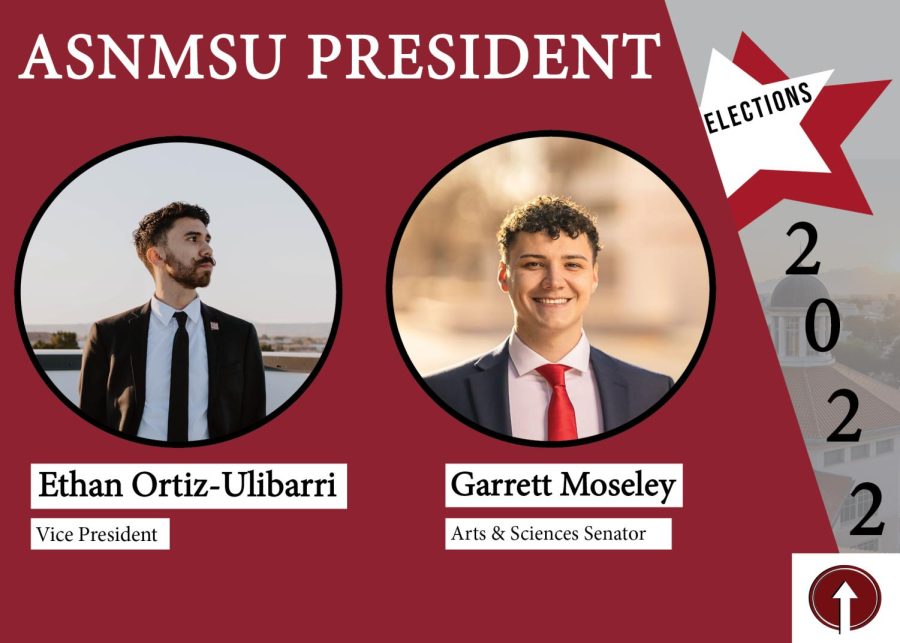 Candidates running to be the next student body president and vice president of New Mexico State University debated to an in-person crowd of very few on March 30, 2022. However, that didn’t stop them from getting down to business and expressing their plans for the association’s and students’ future. Here’s a look at what they had to say.

Current ASNMSU Vice President Ethan Ortiz-Ulibarri and Senator Garrett Moseley are battling their bold ideas for student body president which will be vacated by incumbent Madrid who has served two terms and is graduating.

“The first initiative that I would like to see under my administration is to get New Mexico State University clubs and organizations back to where they were before the pandemic year… really what happened was a lot of information was lost during that period of time,” Moseley said.  “I think one way we can make that ground back up is have a seminar for all club presidents, treasurers, comptrollers, councils, and just tell them this is how ASNMSU can help you.”

Moseley outlined his platform listing some of his ideas if elected president, which includes a more efficient online payment system for clubs to raise money, and transparency of the Student Fee Review Board.

Moseley said the information from the Student Fee Review Board would need to be more accessible through information sessions with students, so they understand how their fees are being spent, especially with the recent tuition increase being approved by the Board of Regents.

For the payment system, he indicated the change would help in making student organizations’ online transactions more accessible without having to go through a reimbursement or departmental index process.

He also emphasized more community outreach and inclusion to help senators be more involved with their legislation and their constituents.

Ortiz-Ulibarri outlined some areas during the debate that he would focus on from highlighting ASNMSU services to students, expanding community service opportunities for clubs, to getting more safety and security infrastructure on campus. He noted that the association also needs fresh ideas to continue with its mission.

“I feel like as an association, we’ve kinda gotten into the groove of things which is good but we’ve gone into a state of stagnancy, it’s time that we bring in new directors or get directors to improve on their positions, bring in new ideas, create an environment where they feel like they can improve their departments,” Ortiz-Ulibarri said.

Ortiz-Ulibarri elaborated on more interesting ideas that proposed would offer free feminine hygiene products, which he said has full support in the senate, along with implementing a “dead week,” which would provide students with a mandated week before finals to have a refresher of course materials.

Moseley challenged some of Ortiz-Ulibarri’s ideas stating that he’s had the opportunity over the past year to hold these conversations with the executive and legislative branches to get some sort of progress.

“I believe you have good ideas but I’m just wondering what was holding you back from implementing these ideas while you did have the opportunity as vice president and how that will change if you were president considering you had the opportunities to do this this year,” Moseley said.

Ortiz-Ulibarri responded by saying that he isn’t the leader of the executive branch, noting that he wants to be, but would get those ideas accomplished under his administration, if elected president. 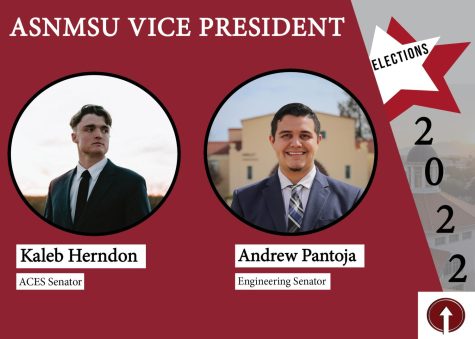 Herndon, is a sophomore who represents the College of ACES, and is the current finance chair and sergeant at arms in the senate, which helps to create the association’s budget.

Pantoja, is a junior who represents the College of Engineering, has been in ASNMSU for three years starting off as a roadrunner intern—he held the position of sergeant at arms and is currently rules chair. He’s also a member of the Student Advocacy Board.

Both candidates were asked what kind of changes or initiatives they would implement under their administration. As vice president, the candidate would serve as president of the senate in the legislative branch and be a member of the executive branch.

“As vice president, there’ve been a few different initiatives brought forth by the 65th senate as workshops and training exercises, and it would be my duty to continue those initiatives and I hopefully would love seeing them as they are now in the law book,” Herndon said. “Continuing on, I would love to implement my new green initiative [Aggies go green] within ASNMSU.”

Pantoja explained that communication among the different branches would be his priority in order to maximize ASNMSU’s reach to students.

“One of the things I do want to do is something we’ve all been saying the last three years I’ve been in ASNMSU, I want to make sure our executive, our judicial, and our senate branch all work together as a team, not this versus that because after all we are a student body association and we serve the students,” Pantoja said. “How can we serve the students if we aren’t helping each other serve the students?” he added.

Both candidates spoke about the importance of showcasing the association’s resources like imbursements through senate, strengthening services like Pete’s Pick Up and Crimson Cab, and highlighting the overall experience that getting involved in student government offers.

Elections start April 4 and run until April 8 at 5 p.m. via Crimson Connection.