NMSU Grad Workers United continue their fight to be heard 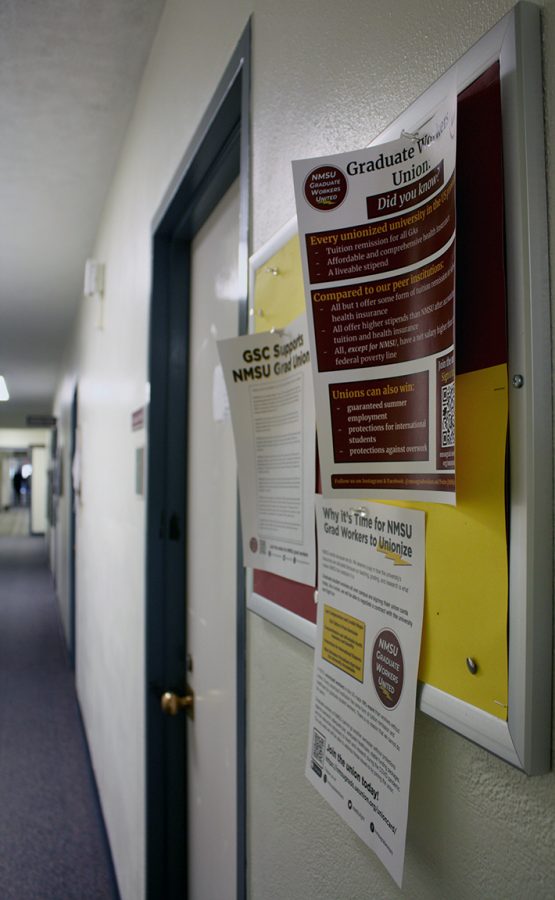 The NMSU Grad Workers United union is expected to be affirmed by the New Mexico Labor Board on April 5, 2022.

We won our card count!

Today the labor board counted our cards and affirmed what we've known for almost a year – a majority of NMSU graduate workers are UNITED for tuition remission, health insurance, fair wages, and better working conditions!

On March 14, the NMSU Board of Regents held their regular meeting, where several graduate students spoke out and shared their stories.

Going into this meeting, students had two requests. One being the full coverage of graduate tuition beginning Fall 2022. The second was for NMSU to withdraw any appeals and to not further any appeals, for a chance for an agreement and to negotiate with NMSU Grad Workers United, Ph.D. student in the astronomy department Matthew Varakian explained.

Before graduate students took the stage, Associate Vice President of Marketing and Communications Justin Bannister reminded Regents that, “…in compliance with the New Mexico Open Meetings Act, the Board is prohibited from taking any action on any item that does not appear on the agenda expect in the case of an emergency, consequently regents will not take into account or action any communication made in public comment unless that matter is already on the agenda for consideration of today’s meeting.”

“I, along with hundreds of other graduate students, will be providing labor for the university, yet still paying to work, while thousands of others attend NMSU for free. What does this say about how much you value graduate workers,” Varakian said.

Brad Hanson is a Ph.D. student in the geography department who shared with Regents that he hopes “to chat and get to know each of you as a person and not the cold, heartless bureaucratic personas you give off.”

“Without healthy relationships with the workers of NMSU and those who decide where funding goes, the Aggie family will continue to be underfunded; not just financially but socially, emotionally, and spiritually,” Hanson said.

A few faculty members spoke out in support to the Regents as well, including Department of Geography Professor Christopher Brown, Department of History Professor Iñigo García-Bryce, Department Government Professor Neal Rosendorf and Department of Counseling Education and Psychology Professor Andrés Pérez-Rojas. Additionally, Samantha Cooney who is a Ph.D. candidate from the UNM Graduate Union came to show her support as well.

Graduate students and professors shared their stories for about 45 minutes, before Regents returned to the next order on the agenda. Hanson explained that he was surprised at both the March and December meeting, that Regents “mechanistically continued on with the meeting” after the graduate students shared their stories.
“I explicitly told them, you can start healing this relationship as soon as the public comments are done, by simply saying, ‘Thank you’, or ‘We heard you’. I understand you can’t agree with anything, you know, like, I’m not asking for that. I’m just asking for you to see me as a fellow human and that you heard me. And they wouldn’t do it,” Hanson said.
Next steps for NMSU Grad Workers United, will include an April 5 New Mexico Labor Board meeting where the union will be certified or NMSU will appeal, prolonging the process further.

“They [NM Labor Board] will either certify our union, or NMSU will appeal, which would essentially just delay the process even longer, and would seem like kind of a waste of time, given that UNM has already withdrawn their appeals against the union up there. So, it would be weird for NMSU to appeal again, given that there’s already a pretty solid precedent set for graduate workers unionizing in the state,” Varakian said.