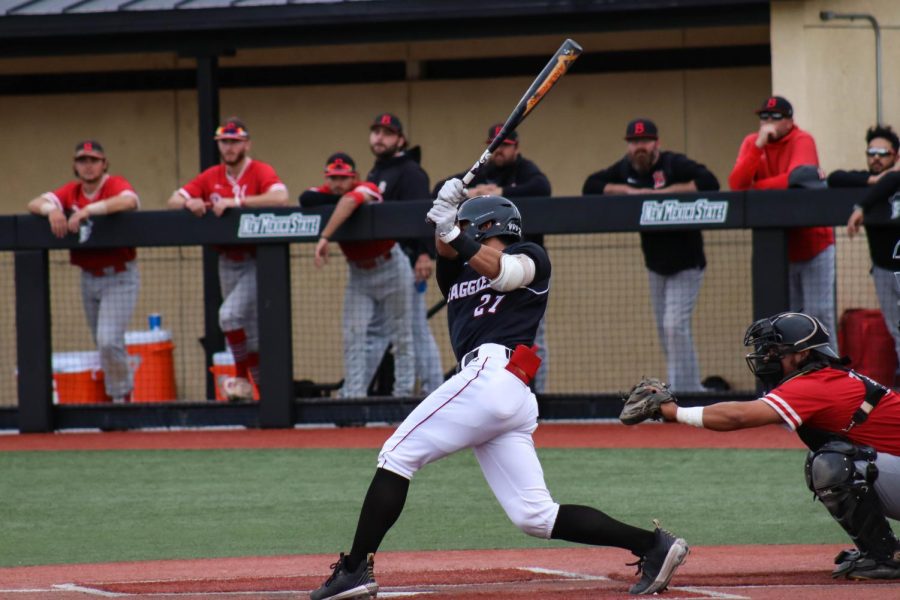 The New Mexico State baseball team traveled to Seattle this weekend where they would earn their first series win in conference play of the season. The Aggies dropped game one of the series but finished off by stealing wins on both Saturday and Sunday.

In the Friday night matchup, the Aggies started the game off with back-to-back walks. With runners on first and second base, Logan Gallina recorded an RBI single to put the away team on the board. Nolan Funke then drove in another run off a SAC fly which drove in Kevin Jimenez, who stood on third base to give the Aggies an early 2-0 lead.

Not shying away, Seattle U used the bottom of the first and the second inning to record a run to even it at two heading into the third inning. In the top of the fourth, the Aggies would see their last run of the night off the bat of Roswell native, Cal Villareal, who recorded his second triple of the season to score a runner to put the away team up 3-2. The home team went on to score four runs in the next four innings to give Seattle U a 6-3 game one victory.

In game two of the series, the action started in the top fourth inning. First Kevin Jimenez doubled, then Logan Gallina singled, driving in Jimenez. Three pitches later, Ryan Grabosch notched his fourth home run of the season to give the Aggies a 3-2 lead.

In the bottom of the fourth, the Redhawks were hit by back-to-back pitches, which aided their last run of the day to even the game at three to end the fourth. After a scoreless fifth inning, the team’s home run leader, Logan Gallina, recorded his 13th homer of the season to give the Aggies a slim 4-3 lead.

In the top of the seventh inning, doubles by both Cal Villareal and Edwin Martinez-Pagani were enough to score two runs with some help from a walk to give the Aggies a 6-3 lead. In the top of the ninth, the away squad added insurance by scoring six runs. Those six runs came off one double by Cal Kilgore, one hit by pitch, two walks, and four singles. The inning saw Kilgore up to bat on two separate occasions. The six-run ninth inning gave the Aggies a commanding 12-3 game two victory.

Game three of the series had a slow start to a wild finish. After going back and forth in the first four innings the score was tied 3-3 after four innings. This is when the party got started for both teams. The Aggies recorded two doubles and two singles to record four hits in the top of the fifth inning. With the help of the four hits, a walk, and a SAC fly, the Aggies scored three runs to take the 6-3 lead.

In the top of the sixth inning, Kevin Jimenez notched his second double of the series, which happened to be a ground-rule double after hopping over the fence. The RBI double drove in Preston Godfrey who had stolen second base a pitch earlier. Answering the call in the bottom half the Redhawks stole a pair of runs of their own to make it a 7-5 ballgame.

Hoping to get their first series win since early March, the Aggies blew the lead open off two hits. The first was a two-RBI single by A.J. Garcia and two batters later made another two-RBI double from the shortstop, Brandon Dieter. After holding Seattle U scoreless in the bottom half of the inning the Aggies enjoyed an 11-5 lead heading into the eighth.

The Aggies would record a single run in the top half, but it was Seattle U that did the damage with the help of a triple, three singles, a walk, and an error by the away team. The Redhawks infielder Trevor Antonson recorded a two-RBI single to add to their tally, he later reached home plate after a SAC fly out. Antonson was responsible for three of the five runs scored in the bottom half to make it a 12-10 ballgame.

The final fireworks for the Aggies came in the top half after back-to-back batters were walked, which forced Seattle U to make a pitching change. After the change, Jimenez and Ryan Grabosch recorded back-to-back singles to score two runs. As Jimenez and Grabosch stood on base, Gallina smashed his 14th homer of the season to open the lead. The lead continued to grow after a two-RBI double by Villareal and a SAC fly by Preston Godfrey, which also scored a run.

In the home half of the ninth Seattle tried to make the game go into extra innings after Aidan Welch scored two runs off a double to center field and a batter later Kyle Sherick knocked a two-RBI homer off the right-field fence. The four hits and four runs weren’t enough to complete the comeback for the Redhawks. The Aggies won game three of the series 20-14 ultimately giving the away squad the series win.

NM State will host Arizona Tuesday, April 26 at 6 p.m. as the Aggies look to continue the weekend success in a mid-week matchup with a Pac-12 opponent.