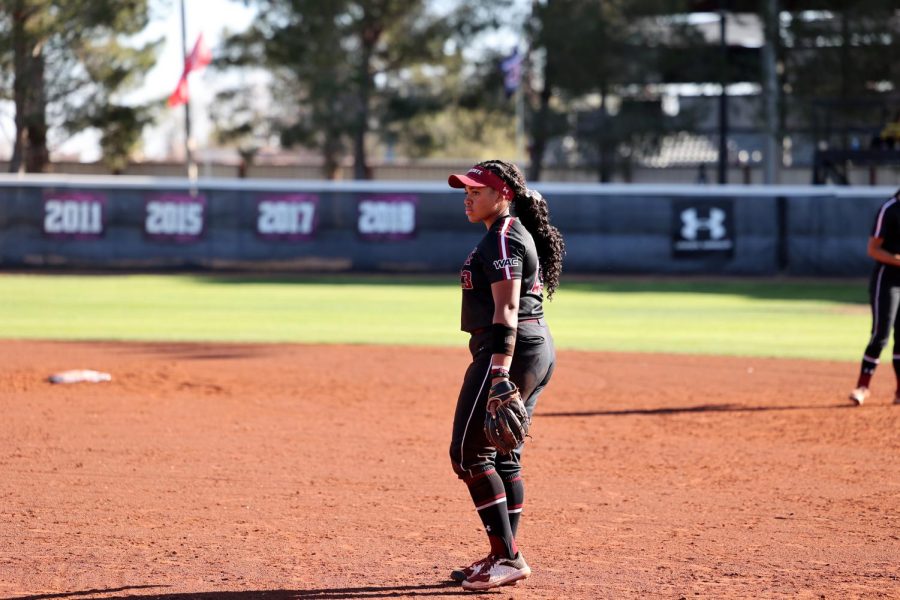 The New Mexico State softball team traveled to Phoenix, Arizona for a three-game tournament against WAC rivals Grand Canyon University. The Aggies and Lopes have matched up before this season in Las Cruces, New Mexico. NM State would pull off an impressive late-game comeback with an 8-7 win in the eighth inning of the first game but would lose the following two games by a combined score of 34-7.

The first match of the series began as a battle of the pitchers. Neither team got on base or logged a hit until the Aggies in the top of the third inning with a leadoff single by redshirt sophomore Gabby Aragon. This however would not lead to any points for NMSU, but GCU would find the board just one inning later, with three runs scored in the bottom of the fourth. Despite this quick 3-0 deficit for this Crimson squad, they quickly responded with three points of their own in the top of the fifth, tying the game at three apiece. The fifth inning would be the last competitive inning for the Aggies, as scored another four runs in the fifth and another one in the sixth to seal the game through seven innings with a score of 8-3 for the Lopes’ victory.

The second game would be played around an hour after the first, with most of the players still warm from the previous outing. This contest would be far less competitive than the previous, as the Lopes would score multiple runs in the second, third, and fourth innings, with another score in the sixth. The Aggies would not find the board until the top of the fifth inning, and at that point, a comeback already seemed out of reach. The Lopes would cruise to their second victory of the even with an 11-3 victory on twelve base hits and no errors, to the Aggies five base hits and one error.

The teams would head to their homes and hotels to get some much-needed rest before their final contest on Saturday afternoon. After dropping both games on Friday, NM State came out firing immediately with back-to-back three-run innings, giving them a sturdy 6-3 lead through the first two. As impressive as this early stretch was, GCU would not be held down for long. The Lopes would score in all five innings of this game, tallying up a series-high fourteen points on eleven hits. The Aggies would be tortured by three errors and only four hits to close out this rivalry series.

NM State struggled through these games on both ends of the field. They were outscored 33-12, out-batted 14 hits to 32 hits, and tallied up 5 errors versus GCU’s zero errors. There were moments of promise in every game, each of which had innings 3 runs scored, but inconsistency haunted them until the end. NMSU will look to turn around their now 10-29 season record during their single game against University for Arizona and two-game WAC series against California Baptist in the coming week.