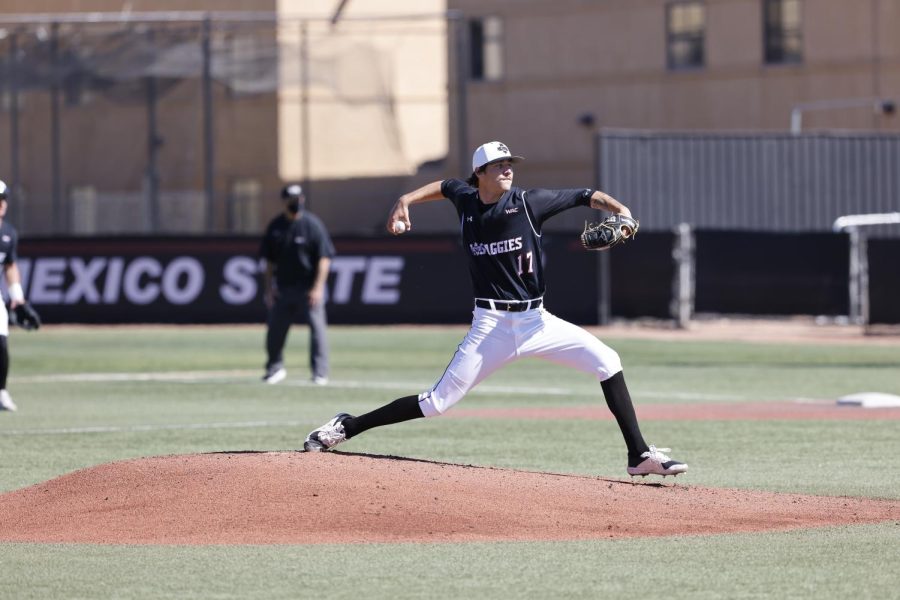 After going 2-1 on the weekend, the New Mexico State baseball campaign earned their second straight series win against the Dixie State Trailblazers. The NM State baseball team now improves to 18-23 on the season.

The Aggies won the first game of the series 6-3 after strong pitching efforts from redshirt sophomore Ian Mejia, who picked up 13 strikeouts in 7.0 innings. The offensive performance began with a double from junior AJ Garcia which plated Edwin Martinez-Pagani. The effort continued after Tommy Tabak got on base after taking advantage of a Trailblazer error and scored with a single from Cal Villareal.

Each team earned a run in the eighth before Alex Bustamonte closed out the game for the Aggies. With two runners on base, Bustamonte forced the Trailblazers into a double play and finished the contest with a strikeout.

Despite a season high of 23 hits, NM State dropped the second game in the series 15-18.

This Crimson squad was the first on the scoreboard, in the bottom of the second, with a two run blast from Tommy Tabak. However, Dixie State replied with a couple of runs to tie the game at two a piece.

After preventing the Aggies from scoring in the third, the Trailblazers created a comfortable cushion collecting seven runs in the fourth. In the bottom half, NM State only plated one run after Villareal scored on a wild pitch.

The scoring continued in the sixth with Dixie State recording two more and NM State earning another run off a wild pitch. The Trailblazers tacked on three more runs before the Aggies started to regain control in the bottom of the seventh with seven combined hits including RBI singles from Taback, Martinez-Pagani and Garcia. Then Brandon Dieter got NMSU within one run thanks to a three-run home run over left field.

Dixie State responded with a home run of their own in the eighth and kept the Aggies scoreless in the bottom half. The Trailblazers picked up two more runs in the final inning after taking advantage of two NM State errors. However, NMSU continued to battle and saw a glimpse of hope with a RBI single from Gallina but they eventually dropped 18-15.

After the contest, Head Coach Mike Kirby gave his take on the game. “Offensively we were really, really good today. But the pitching wasn’t as good today,” Kirby said.

Riding the momentum from their win the night before, the Trailblazers were first on the scoreboard after they batted in three runs in the top of the first. Gallina responded with a homerun over center field to get the Aggies on the board.

Dixie State added three more security runs in the second before NM State plated a run in the third to cut their deficit to 6-2. Then with back-to-back home runs, the Trailblazers pushed their lead to 8-2 in the fifth. Once again, the Aggies responded with a one run- a double by Cal Kilgore that scored Nolan Funke.

Finally in the sixth inning, NMSU started to turn the game around. Tabak led the inning off with a triple down the right field line, followed by a homerun by Martinez-Pagani. Then after Villareal got on base with a single, AJ Garcia brought him in with a shot over the left-center fence. Jimenez tied up the game at 8-8 with an RBI double that scored Kilgore.

The Trailblazers responded with one run, but the Aggies answered with five more. The effort began with RBI’s by Gallina and Martinez-Pagani. Then NM State was able to pick up another run off of a throwing error and two more after a single from Nolan Funke. Redshirt junior Frank Dickson IV earned his first win after closing the game with two scoreless innings.

Head Coach Mike Kirby and his team will now travel to California Baptist for their next series. The teams will face off Friday May 6, at 7 p.m. followed by Saturday’s game at 6 p.m. and Sunday at 1 p.m.