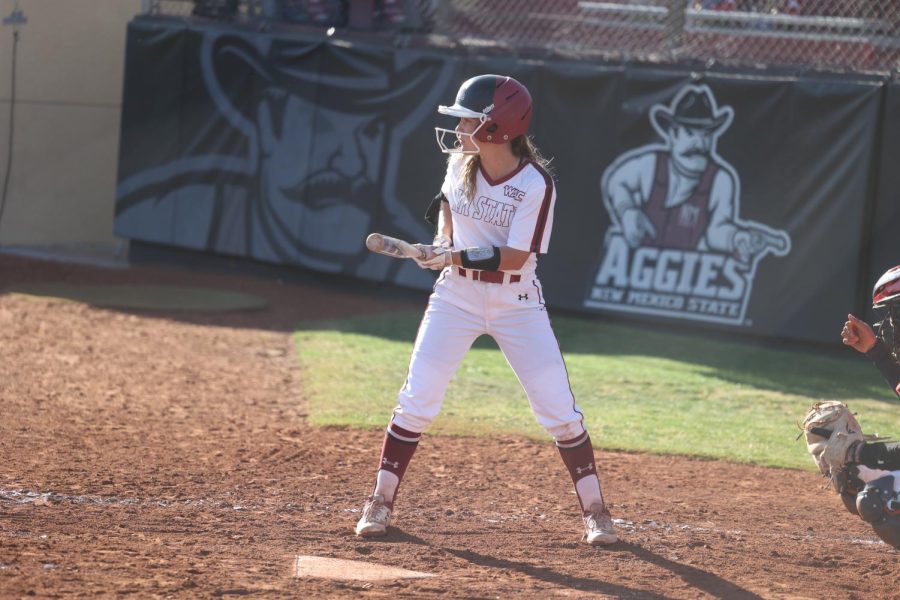 The Lady Aggies headed into Friday’s matchup currently riding a 5-game losing streak, with three losses against Grand Canyon, and two losses to the top-25 ranked Arizona. Both these teams have had very strong seasons this year, and the Aggies will look to turn their spirits around heading into their final two series of the season.

The first game of the series began with a quick jump to the lead by California Baptist. The Lancers scored three quick runs in the top of the first inning and held the Aggies scoreless through three innings to follow. California Baptist would score yet another run in the top of the fourth, but the Aggies responded with a run of their own, bringing the game to a score of 4-1 with the Lancers in front. After a scoreless fifth for the Lancers, the Aggies made their move. NMSU notched four runs off of three walks by the Lancers, all leading up to a grand slam by freshman catcher Hannah Lindsay, pushing the Aggies ahead 5-4. This did not last long however, as the Lancers responded with five runs of their own in the sixth to ice the game, with a final score of 9-6 for the Lancers.

NMSU faced Cal Baptist once again the following day in the first of their double-header. This game would see much more scoring from both sides with each team tallying up double-digits in the hit column. The Aggies would be the first on the board with four quick runs in the bottom of the second. This would be just the beginning of many more runs by both teams, as the Lancers followed with four runs of their own, followed by yet another three runs by the Aggies. The scoring did not stop there however, as CBU dropped another six runs over the next two innings to NMSU’s two runs. The Aggies scored their final run in the bottom of the sixth, but it was too little too late, as the Aggies drop the second of three games with a score of 10-9.

The third and final game of the series would see a stark contrast from the previous ones in the department of scoring. It would not be until the top of fourth inning that the first runs would be scored, as the Lancers notched a quick two, bringing the score to 2-0. CBU would not find too much success from their bats in this matchup, but their woes would not be as heavy as the Aggies, as they would be held scoreless throughout. The Lancers would score three more runs in the sixth, and eventually cap off the game with a 5-0 shutout victory over the NMSU Lady Aggies.