NMSU Round Up • February 20, 2018 • https://nmsuroundup.com/8887/showcase/new-mexico-state-students-try-handle-long-distance-relationships/ 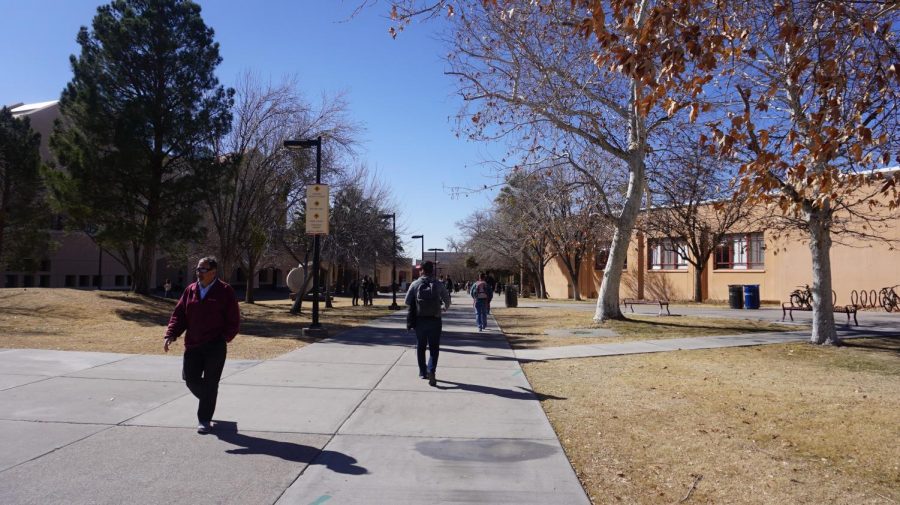 Relationships are an essential part of getting through college—whether they are through professors, advisors, bosses or loved ones. College students who make the move away from home to attend school often leave their loved ones behind—sometimes these loved ones are romantic partners that they hold onto through a long-distance relationship. Some students find that this type of relationship during college is not worth it while others may view it as worthwhile.

Some students may view being in a long-distance relationship as a complete waste of time or as a distraction. Other may find the relationship to be well worth it even if it means dealing with separation. The Round Up spoke with several students with experience in dating long-distant to explore the circumstances that make up these relationships.

Celeste Ramirez from Wilcox, Arizona put an end to her four-year relationship that was long-distance for one year the day before she came to New Mexico State University.

Ramirez began dating her ex-boyfriend when she was a freshman and he was a sophomore in high school. Their relationship became long-distance during her senior year when he moved to North Dakota on a wrestling scholarship. The only time they saw one another that year was when he came home for winter and summer break.

“We found ways to communicate—through FaceTime and text,” Ramirez said. “Once college wrestling season started, I would only exchange a few texts with him because he was constantly training and attending classes.”

She realized a few months into the separation how difficult the relationship was becoming since she had always been used to spending every day together. When there was communication, it was mostly fighting. Ramirez says it was not long until she felt the two of them drifting apart even though neither one wanted to end it.

“There was no spark and no feelings—We both knew it was not going anywhere from there [when he came home for the summer],” explains Ramirez. She soon found out that he been cheating on her, wanting no part of the long-distance relationship any longer, and moved to attend NMSU the following day with a fresh start.

Ramirez says she does not regret the relationship, but knows now that she would never be in a long-distance relationship again while her perspective on relationships has changed.

Since moving, she says “I am so much happier now because I am focused on growing by myself, finding out who I truly am, and not having to worry about someone else holding me back.”

Amado Borrego began his current relationship as a sophomore in the same high school as his freshman girlfriend. They became long-distance last fall when Borrego left Silver City, New Mexico to attend school in Las Cruces.

He has been with her for almost four years.

“Sometimes we have our downs because long distance is hard. It is going to be worth it in the end and that is what keeps it going.” explains Borrego.

Borrego attends Dona Ana Community College to study radiology while his girlfriend will begin her education in nursing this fall at Western New Mexico University in Silver City.

Borrego and his girlfriend accepted one another’s academic visions, which includes locations of their educations, and this allowed their relationship to keep going once separation by distance came along. He says his girlfriend would like to attend WNMU because she is interested in its nursing program and he made the move to Las Cruces because there is not a radiology program back home.

When asked about what realizing that him and his girlfriend would be separated by distance for many semesters to come, he explained, “We just wanted to see what was best for us and [agreed] it would be worth it [for us to stay together].”

He also says it is exciting in a different sense now when he gets the chance to see her.

Las Cruces is about 100 miles from Silver City and a two-hour drive away. When Borrego is away, he keeps in touch with his girlfriend through text messages and phone calls. He says that he also likes to make a few trips during the semester to go visit her.

Freshman Calise Cotrell has been in a relationship, the majority of it being long-distance. Her and her boyfriend both came from a small town in Texas and knew each other their whole lives. They have been dating for three years.

The long-distance aspect of their relationship began during her sophomore year in high school when he began college at NMSU and then transferred to a university in San Antonio, Texas. Like Ramirez, Cotrell also agrees that communication in long-distance can be challenging. She has seen how not only communication, but also other issues as well take a little more effort in a long-distance relationship.

Long-distance in college has been an adjustment for Cotrell in comparison to high school. She says communicating has been easier since her transformation to NMSU despite being very busy and dealing with a one-hour time difference. She feels that the ease has come from learning and moving on from old experiences. Being in college, she feels that her gaining more maturity has been a great asset to keeping her relationship strong.

“We know now how important it is to talk to one another about the little and big stuff,” says Cottrel. When she does reach out to him, Cotrell has to have his schedule in mind to be sure that she is not interfering with any of his activities.

One way that Cotrell keeps up with her boyfriend is through FaceTime, a feature that people in this day and age are lucky to have access to. She says that they sometimes have study dates through FaceTime.

“Finding ways to be a ‘normal” couple from afar is always interesting,” said Cotrell.

The transition from a previous life to the college life can be difficult for anyone. College students put so many aspects of their life on hold or move on from them. However, everyone writes a different story for their life and students choose is who is worth keeping during this adventurous time.

“In my opinion, long-distance is not worth it; but I do recommend that people try it and get their own opinion on it. It is very difficult especially when you are 2,500 miles away from each other like my ex and I were.” said Ramirez. “It was really tough, but I have learned so much about myself and how important self-love is—so I am glad I went through that.”