NMSU Round Up • April 15, 2018 • https://nmsuroundup.com/9636/showcase/new-mexico-governor-candidate-lujan-grisham-has-less-than-impressive-resume/ 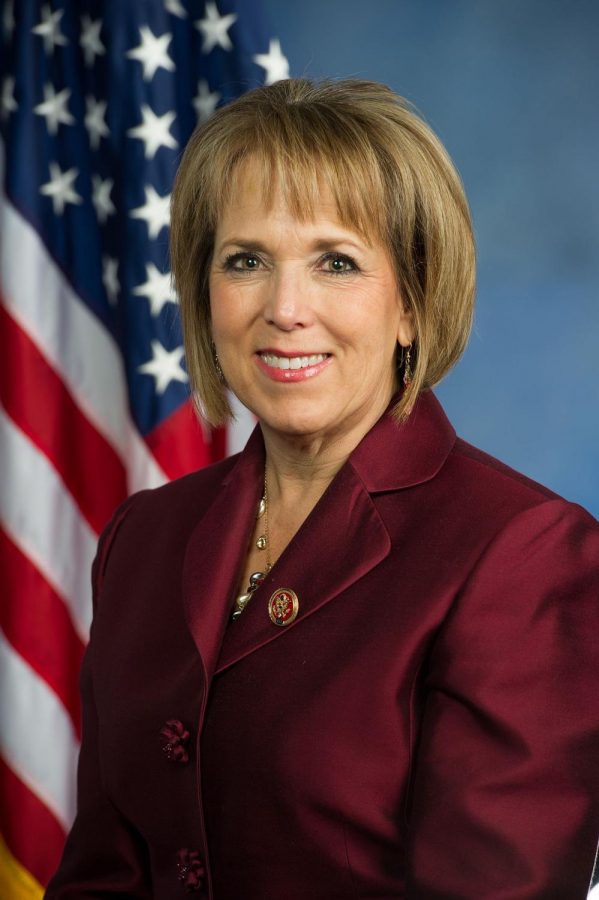 Michelle Lujan Grisham, candidate for governor of New Mexico, will be inheriting a hefty load of problems if elected as state governor, problems that she has seen in the past as director of the state’s Agency of aging and secretary of the Department of Health.

Grisham, who currently serves as U.S congresswoman for New Mexico’s 1st district, previously served as the head of New Mexico’s Agency of Aging and secretary of the Department of Health from 1991-2007 under Governors Bruce King, Gary Johnson and Bill Richardson. Richardson raised the position into the state cabinet and then named Grisham Health Secretary in 2004.

During her time as head of the Agency of Aging, Grisham, along with another official in the agency, went “undercover” to better understand how patients were treated in their state-run long-term care facilities. According to a story from the Albuquerque Journal in 1997, during their 2-3 day stay at facilities in the state, they endured “thoughtless care” and even had items stolen.

Grisham had overseen the agency in charge of these care facilities for six years and her agency had heard complaints for years before she went undercover.

To prevent corruption in government agencies and protect the rights of senior citizens in long-term care facilities, the Older Americans Act (first enacted in 1965) requires a unique position called the “long-term care ombudsman” as a condition of accepting federal block grants.

Tim Covell served as ombudsman of the Agency of Aging until he resigned in 1997 when he claimed Grisham prevented him from sending a letter to the state Secretary of Health.

According to the Albuquerque Journal in 1997, the letter asked the secretary at the time, Alex Valdez, to close a facility in Albuquerque that had continued to operate with the department’s knowledge for almost four years without a license in which they had been denied.

The U.S. Department of Justice did an investigation on the Fort Bayard Medical Center outside of Silver City in 2004 in accordance with the Civil Rights of Institutionalized Persons Act (CRIPA). Ft. Bayard, being state-owned and -operated, fell under Grisham’s department. The investigation resulted in finding that the residents of Ft. Bayard “suffer significant harm and risk of harm from the facility’s inadequate medical and nursing care services”.

According to the letter the DoJ sent to Governor Bill Richardson, Ft. Bayard failed to provide proper medication practices, safety, nutrition and hydration and other basic human needs.

“We found numerous situations where residents’ last days of life were spent in miserable pain as they died from the effects of what appeared to be reckless and almost willful disregard to their health and safety,” the letter said. “In fact, in practically every record we reviewed of deceased or current Ft. Bayard residents, we discovered life-threatening omissions and commissions of treatment.”

There were at least eight deaths that could have been avoided with proper care as well as pain and suffering endured by numerous residents during the investigation.

The details of these victims’ demises are listed in the letter of findings starting on page 4 and ending on page 22.

Grisham told the Albuquerque Journal, that the department knew about these problems “for a long time from adult protective services” and that “her head was exploding” after receiving the reports. She also said that the administrator for Ft. Bayard was not licensed.

Grisham hired GEO Groups, a company that provides rehabilitation to in-custody individuals, to run Ft. Bayard in 2005, the same year after the DoJ did their investigation.

During Grisham’s tenure, she also removed Steve Nickell from his position as the Immunization Manager of the New Mexico Department of Health. The state of New Mexico was ranked second to last in infant shots when Nickell came in in 2002. By 2005, Nickell’s leadership resulted in the state moving up to 15th.

After Grisham took Nickell out of the Department of Health, New Mexico’s ranking went down to 30th.

A similar act of mismanagement is the termination of Dr. Gary Simpson, the Director of the State Health Department’s Infectious Disease Bureau. A group of 20 doctors and health professionals sent a letter to Gov. Richardson to protest the dismissal of Simpson.

After 16 years serving as head of the Agency of Aging and Health Department, Grisham resigned telling the Albuquerque Journal that the appointment was the “hardest job on the planet”.

Grisham also told the Albuquerque Journal that she “inherited” all these problems, despite being in charge the agencies involved since 1991 and having done undercover work to identify them.

Grisham will be seeing these problems again if she is elected as governor and oversee 122 departments of the New Mexico executive branch.

The candidate’s problems running the Department of Health have given her a bad image in the eyes of the people who will be voting in the election.

William Bradford, a sophomore studying government at New Mexico State University, says that he believes Grisham is a well-experienced legislator, but he has his doubts.

“[Grisham’s] years of experience in politics including her most recent as a U.S. Representative has proved her ability to legislate and govern effectively,” Bradford said. “However, [Grisham’s track record] concerns me.”